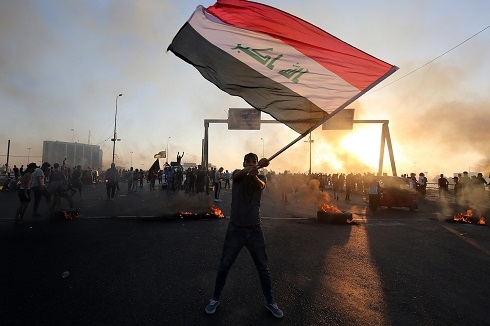 Dubai — Iraq's new prime minister will need to make use of his stint as intelligence chief and the near political consensus around him to help avert a collapse in the economy of OPEC's second largest producer while keeping a resurgent Islamic State group, US-Iran tensions and public discontent in check, according to analysts.

The country's parliament granted Mustafa al-Kadhimi, most members of his cabinet and his government program a vote of confidence Thursday, after the two previous candidates failed to win political backing in a country that has been governed along ethno-sectarian lines since the US invasion in 2003.
Kadhimi now has the complicated task of extricating Iraq from a recession, with the economy expected to shrink 10% in 2020 by the World Bank; eliminating a resurgent ISIS in the north; gaining the trust of a populace that brought down the previous government; and maintaining the delicate balance of having good ties with the US and Iran, two countries vying for influence in Iraq.

Iraq, which relies on oil income for over 90% of its revenues, is struggling to pay the salaries and pensions of a bloated public sector as the oil price crash has whittled down monthly oil export sales from over $6 billion in 2019 to $1.4 billion in April.

The oil price crash has been compounded by the coronavirus pandemic, which has idled activity in the country and taken a toll on its vital oil industry.

Iraq took the biggest hit to its production among OPEC members in April, shedding 110,000 b/d as low fuel demand and a lack of refined product storage space forced its refineries to severely lower their crude runs, according to the latest S&P Global Platts OPEC survey. Production was 4.54 million b/d in April.

Clean Slate
Although Kadhimi has "a clean slate," he will have to make unpopular reforms in order to shore up government revenue, a move that could ignite protests that forced his predecessor Abdel Abdul Mahdi to resign in November, according to analysts.

"Some of these ... measures will include, among others, downsizing the public sector, including furloughs and hiring freezes; salary cuts to government employees, especially at the senior level; and reducing investments in public infrastructure projects including the electricity, health and education sectors," said Randa Slim, a non-resident fellow at Johns Hopkins University School of Advanced and International Studies (SAIS) Foreign Policy Institute.

"These measures come with high political costs and will be unpopular in a country that has already been gripped by protests against corruption and poor governance," Slim added.

And all of this will be taking place against the backdrop of a fragile security situation.

Terrorist attacks in the same week in various provinces also knocked out 450 MW of electricity supply in a country that suffers from power outages and has to import electricity and natural gas from Iran to plug the deficit.

"Dealing with ISIS is going to be a priority and the US could potentially offer some assistance to Iraq (to fight ISIS)," said Iraq analyst Sajad Jiyad

Besides the Islamic State group, sporadic missiles have often targeted US and foreign interests in Iraq, including an attack in April near sites of oil companies in the energy-rich southern city of Basra.

Although no one claimed responsibility for the attacks, Iranian-backed groups have targeted US interests, particularly after the US killing of top Iranian commander Qassem Soleimani in Baghdad in January.

'No peace'
As intelligence chief, Kadhimi has had to maintain good ties with all the powerful players in Iraq, said Jiyad.

"He is not confrontational, and he has good diplomatic skills. He understands that if there are tensions between these two countries, there will be no peace in Iraq," he added.

After the vote, US Secretary of State Michael Pompeo spoke with Kadhimi and granted Iraq a 120-day waiver to continue to import Iranian gas and electricity without the threat of sanctions, US Department of State spokeswoman Morgan Ortagus said in a statement.

"Washington DC will be observing closely what kind of team he surrounds himself with, what will be his priorities, and how he will try to balance between US and Iranian interests in Iraq," said Slim. "Abel Abdul Mahdi has long been viewed in DC as Tehran's guy in Baghdad. Kadhimi is viewed as an Iraqi bureaucrat who has proven to be highly professional and capable at striking a middle ground between these two important external players in Iraq."