Syria is approaching to an end, and eventually; the international community has to make a decision 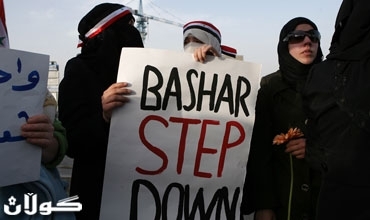 The daily events and the increased violence are all indicators to the fact that the situation won’t last for both sides. If the international community doesn’t take a serious step to solve the Syrian issue and stop Assad’s regime, then they will be witnessing a genocide which seems to be the same what Iraq Bath’s regime done against its people, and eventually; the same history will be repeated again. So; these facts are telling us that if the international community bet on Assad to relinquish power, then; this is too far to be happening because Bashar Al-Assad is preparing himself for a decisive battle. On the other hand; if the international community thinks that the Syrian people will give up demonstrations and will peacefully start reforms with Assad’s regime, then; this is again a wrong bet to make.
Regarding to the two expectations the international community is betting on, we contacted the professor Jeremy Pressman, an Associate Professor of Political Science, and Coordinator at the Middle Eastern Studies, the Professor Pressman believes that the international community studied too many solutions and they are not concerning only on two of them, he replied to our questions in an exclusive interview to Gulan Magazine as the following, saying: “I'm not sure that there is only two chooses; I think there is a lot of chooses. I think that what we are going to see is rather than the international community speaking with one voice, we are going to see what we have seen over the last few months; which is many countries being very upset by what is going on in Syria, in fact most countries in the world – as we saw with the United Nations’ General Assembly’s vote – most countries in the world rejected what the Assad regime is doing, and I think this will continue for a while until to see the minority countries that aren’t ready to sanction broad international action, but I don’t think that would means sort of wars, I think what we are going to see some countries continuing to do things like speaking out against what Assad’s regime is doing, countries potentially providing training, personnel, funding or arms, countries providing refuge, and few countries like Turkey, Iraq, or Jordan, as you know geographically; there are material cost here, there are issues that has to be faced regardless of what the international community deciding to do. So; I think it is like the economist choice of either or; I think that there is many countries involved, and they are going to make many different choices. There have been efforts to take broad international actions and block, but countries continuing to support Syria, like when the United Nations’ Security Council tried to take action, Russia and China blocked a resolution. So; I don’t think it is from the lack of effort or interest. I just think there is only limited number of mechanisms you have. If the Security Council want to take action you can go and pass the General Assembly resolution, but that doesn’t operatively have that much impact. So; when you have a few countries that have the veto they will use it, in many times in the past the United States has been willing to veto in the international actions. In this particular case about Syria it was Russia and China that they were willing to veto. So; I don’t think it is silent, I can speak to the most of the U.S. debate; I think the United States debate the possibility of intervention in Syria and about what is going on in Syria is pretty intense right now, I think it’s overshadow somewhat by the debate about U.S. and Iran. But I do think that there is a firm of debate in the U.S. among the foreign policy community about what to do about Syria and about if they continue to be voices who are speaking out in favor of the idea of military intervention or some other kind of direct action. I'm not saying that’s going to win the day, but I don’t think the debate is over, at least in the United States, and I think that there are other countries in the world that continue to be concern about it.”