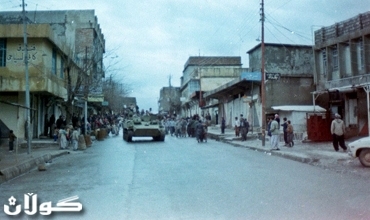 So again the aim of the revolution shapes the history and identity of the revolution, regarding national revolutions, like revolution of an oppressed nation, we contacted Professor Donald P. Moynihan, Faculty affiliate at University of Wisconsin-Madison, he expressed his responds to GULAN magazine as "I think there has to be broad based support for the goals of the revolution in the society among different groups so to take the American Revolution as an example, here you had a rowdily broad group of society who believe that they will be oppressed by the British colonial system. I think we do have examples in the history were uprisings in the basis have found new nation, I think one of the most important things so for these nations succeeded is that they can find the way to get along with the neighbors, so I think in the American case because America is geographically isolated that was a little bit easer realest examples of some places Europe and former Yugoslavia or even Ireland were you had uprisings let longer disagreement between neighbors in general I think finding areas of agreement between different parts of society or different parts of the country is important to try to sustain some sort of long term peace after and uprising take place. I think having an ability to not just go to revolution and uprising but also think about the structure of governance afterwards is very important so maintaining some sort of long term success from uprising in American case the design of governance here makes it so that no single group or party can completely dominate and so that no one can take over a sort of dictatorial power or royal power that would make one person much more important than the rest of society I think this a pretty good lesson for other countries because it suggest that having separation of power produces potential that any group cannot dominate another group".

The important point is that; how the mechanism of unity and cooperation during and after the success of revolution will? We asked Professor Stuart R. Cohn, professor of law at Florida University, in his responds to GULAN magazine: "I think the two most important factors are transparency and participations what I mean by that is that the population is advices at all times of exactly who is in power and what the policies are of the parties that are in power and by participation I mean that the population has given the opportunity through elections direct elections to have a voice to who the people are that actually operate those policies I think that those are the most important elements transparency and public participations. It’s a very important first step because as you explained the problem of uprising nations means that people are not been given their basic rights, sovereignty justice and freedom to act as titled to and therefore a revolution is an attempt to restore that to free people who has been improperly imprisoned and to restore a sense of justice to that country its extremely important first step in trying to do that. It can be a very important factor because the rebuilding process is going to need assistance of outside countries assisting that rebuilding process and if there is transparence and good intention and integrity of the new leaders it will be very important to the third parties to come in for assistance for rebuilding because if it becomes an oppressed nation at the time of revolution the country does not have adequate resources to rebuild the company of the country through infrastructures and telecommunications and healthcare and all the kinds of important things that is necessary education to rebuild the country often the revolution comes at the time that the country does not have these resources there for its very important for the new leaders to be able to establish the confidence of outside countries and ageneses to assist in the rebuilding process until that country develop its own resources and create its own instructions to its own capacities".