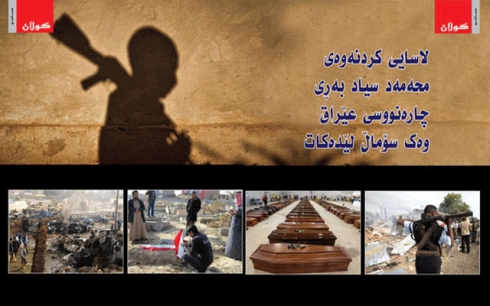 Strong states unquestionably control their territories and deliver a full range and a high quality of political goods to their citizens. They perform well according to indicators like GDP per capita, the UNDP Human Development Index, Transparency International's Corruption Perception Index, and Freedom House's Freedom of the World Report. Strong states offer high levels of security from political and criminal violence, ensure political freedom and civil liberties, and create environments conducive to the growth of economic opportunity. The rule of law prevails. Judges are independent. Road networks are well maintained. Telephones work. Snail mail and e-mail both arrive quickly. Schools, universities, and students flourish. Hospitals and clinics serve patients effectively. And so on. Overall, strong states are places of enviable peace and order.
Robert I. Rotberg When States Fail

If an analogy is made between Iraq in 2003 when the former regime collapsed and Somalia in 1960, one can see similarities which can be useful for analyzing the situation in Iraq. In 1960, Somalia consisted of two states. One was run by Britian called British Somalia, and the other was run by Italy dubbed Italian Somalia. The two, after announcing independency, became one and united.
In 2003, Iraq was also in two parts. One was monitored and protected under security resolution 688. This safe haven or Iraqi no-fly zones included part of southern Kurdistan, and the other part which included south of Iraq was run by the former Iraqi regime. After the collapse of the regime, the KRG reunited with the other part of Iraq to form a new Iraq and this has been consolidated in the new constitution since 2005.
In Somalia, after the unification of the two parts, elections were made and a new constitution drafted and then voted for and since then there has been a civilian rule there.
After 2003, several elections have been held, a new constitution drafted and voted for, and until 2011 there has been a hope for democratization and a civil ruling.
In late 1969, Mohamed Siad Barre seized power in a coup in Somalia and he justified his action by saying that the politicians made the country worse, and he did the following:
1. He killed and executed politicians saying they were corrupt and unskilled.
2. He suspended the constitution which had been voted for by Somalians.
3. He prohibited political parties in the country.
Like this, Nuri Al-Maliki in Iraq launched a coup in Iraq and justified his action by saying that the Sunni politicians were corrupt and involved in terrorism, so he has done the following since 2011:
1. Directly after American withdrawal, Maliki ordered to arrest Iraqi vice president Tariq Al-Hashimi without prior notice to the president of Iraq, and he arrested his guards and they were executed, but he himself fled to Iraqi Kurdistan then to Turkey.
2. Since Maliki had no power in Kurdistan because of Peshmarga, he couldn’t do what he did in the south. Yet in Baghdad and other cities he restricted political activities for Sunni politicians in particular.
3. For making his coup succeed, Maliki continually created problems for KRG. He used budget and oil as justifications. Then he boycotted parliament.
The dictatorial rule of Mohamed Siad Barre weakened the state of Somalia and it became a failed state, and collapsed inside. Similarly under the rule of Maliki Iraq is stepping towards a collapsed state as it has become weak and failed since 2011.

The concept of failed state or collapse state is not new. Yet the condition varied from time to time and from a state to another. For example if collapsing, weakening, and failing of a state had an impact only of the state itself during the Cold War, now this may have strong impacts on the security and stability of the whole world. Thus, one needs to contextualize and interpret the failed state within the current situations of the world. If in the past a failed state meant that one could not run a state by using force, now this means one is not able to answer the needs of its people and make a balance between its ingredients. So if now a state uses force to resolve the problems, the world will see it as a failed state. North Korea can be seen as an example.
Robert I. Rotberg states:
Modern states focus and answer the concerns and demands of citizenries. They organize and channel the interests of their people, often but not exclusively in furtherance of national goals and values. They buffer or manipulate external forces and influences, champion the local or particular concerns of their adherents, and mediate between the constraints and challenges of the international arena and the dynamism of their own internal economic, political, and social realities.
Based on what Rotberg points out, one can distinguish between weak and strong states by saying that strong states provide political freedom. This is an abstract which helps the citizens create sovereignty and reuse it in constructing a state. That is, reconstructing a state, based on freedom and political contribution, makes it strong and having sovereignty.
Political freedom and contribution will pave the way for predicting the future of a state by citizens, and also have an impact on the citizens’ attitude towards their commitments. These give meanings to the social contract that gathers both a ruler and a ruled. At the same time, it becomes the essence of the system in which both citizens and power influence each for the future of the country. There is a hierarchy among ingredients of political services that states offer. Among them security is the most important. Thus, the content of political service is those codes and mechanisms that together create a base for rule of law.
Before talking about weak states, Robert I. Rotberg talks about characteristics of strong sates, then interpreting the lack of these indicators in weak states, explain the reasons that lead weak states into collapse ones. He concentrates that knowing the reasons will help policy makers to find solutions for it.

Based on Rotberg’s ideas, one can give an explanation for the situation in Iraq:
Iraq is now facing terrible and violent problems inside. The situation is deteriorating day by day. This instability in Iraq shows an example of a failed state to the world and it becomes a safe haven for terrorists. The Sunni Arabs’ attitude towards terrorism depicts the image of a collapse state. That is, they do not help fighting terrorists though they are not with them. Authorities in Iraq are in the hands of elite and these elite submit only to Maliki. This elite is now dubbed ‘Malikians’ in Iraq because even within Shiites they are not liked as it is obvious from disputes between Sadrists and the elite. Maliki’s group are now confused, do not know what to do. So they refuse whatever is good for Iraqis, and trying to delay the elections so that they remain in power more.
In order to incite prejudices among Iraqis, Maliki wants to impose the former regime’s law on KRG regarding gas and oil. Now according to the constitution and political agreements, Maliki’s rule has no validity, even in the eyes of Shiite factions. This situation in Iraq is caused by Maliki’s violation of constitution, which per se leads the state into a weak one, and then to the collapse one.

Iraq as a collapse state