This can never happen again 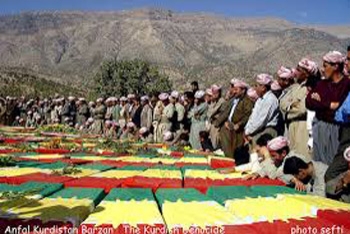 “No good.” Thirty-two years ago today, those were the words that saved my life. I was nine, and the Iraqi army officer measuring me against his stick had decided that I was too small to count as a man. He and the others like him had come into the Baherka camps early in the day, driving into them in Russian made trucks and starting to round up every man and boy they could.
We were in Baherka camps because my tribe, the Barzani, had dared to rebel against Saddam Hussein in the 1970s, looking for independence. The government’s troops had come to our villages, tearing those villages apart as they forced us to move to camps closer to the big cities of Kurdistan. Our day to day lives had become brutally controlled, we could be killed at any moment, and food was scarce. Yet in some ways, the last of these helped to save my life too, because it left me as one of the smallest boys there for my age.

Other boys my age found themselves loaded onto trucks along with the grown men, deemed to be big enough to be able to fight. They had been told that they were going for a meeting with Saddam, but most probably believed that they were going to be forced to serve in the army. That had happened before, and it made sense when they only wanted the men. The assumption was that the Barzani, who had acquired a reputation for successful guerrilla tactics in the mountains, were wanted for the ongoing conflict with Iran.

We now know what actually happened: on the 31st of July 1983, more than 8000 men and boys from the Barzani tribe were taken from the camps where they were being held by Saddam Hussein’s army, driven out into the desert, machine gunned and left in mass graves. Their bodies were bulldozed over, without checking whether they were alive or dead. While the specific bodies have not been identified, similar mass graves have been found in several spots in Iraq and Saddam Hussein, when asked what had happened to the Barzanis, said that “They betrayed their country and so they went to Hell”. The implications were clear.

The massacre of 1983 is often forgotten when we remember the larger genocide of the Anfal, which followed five years later. It is seen as a footnote at best, something to be ignored completely at worst. It is understandable that this might be the case. The Anfal involved the systematic murder and displacement of hundreds of thousands of people. It created a refugee crisis that lasted for many years. It involved the use of chemical weapons against civilian targets, as at Halabja, and it included attempts to fundamentally change the ethnic makeup of Northern Iraq. Compared to that, the murder of 8000 people might not seem as important. Yet it is crucial to remember the massacre of 1983 as well.

It is crucial for a couple of reasons. The first is because it served as a precursor to the Anfal, with its murder of 182 000 people. The Anfal is, itself, an event that is often forgotten internationally, in spite of the scale of the killing across 1988-9, but it becomes even easier to forget when it is seen as an isolated moment of madness, not connected to anything that went before. That is the story that some people would like the world to hear, but it is not a true story. The murders of 1983 prove that. They instead point towards a pattern, a connected together thing that built in scope until it became something unimaginable. They show that the Anfal was something that was planned towards over a period of time, and suggest that it was something that might even have been stopped if people had seen it in time. Certainly, they show that genocides do not come out of nowhere. There are warning signs, and we do need to be prepared to act when we see them.

But that is not the only reason why remembering 1983 matters. It matters because every one of those 8000 men and boys was a life cut short. It matters because in any tragedy of that scale, it is vital to remember the human stories behind the numbers. To remember that these were real people, taken from their families. People who were loved, and missed, and mourned. While not everyone reading this will be able to understand what it is like to lose someone to this kind of mass murder, it is likely that everyone will have mourned the loss of a relative for another reason at some point. The temptation is to think of a tragedy like this as something emotionally different. While it certainly represents a special situation, the emotions remain the same. The sheer numbers involved can make it seem like the situation is something impossible to understand, but the fact is that loss is one of the most understandable of all human emotions. We must not forget that.

Remembering also matters for another reason. It matters because it shows how quickly civil conflict can escalate breaches of the standards that all governments are bound to uphold. The situation in the 1970s and 1980s in Iraq was one where the Baghdad government’s response to insurgencies aimed at creating an independent Kurdistan escalated beyond anything proportionate, or reasonable, or even sane. That is as relevant today, when we find governments using disproportionate force to attack civilian targets, as it was in 1983. It will always be relevant. Just a short while ago, people commemorated the anniversary of the genocidal killings of Srebrenica, in the Balkans. It was a moment of mass murder with remarkable similarities to 1983, with men singled out and taken away on trucks, never to return. With an international community standing by when those men should have been able to expect its protection. I mention it here for one reason: because it shows
that we do not learn.

We all hope for a world where people are not murdered simply for their ethnicity, or where that murder can go unremarked by the wider media for years, yet the massacre of Barzani men and boys did not stop such things from happening. They did not encourage governments to stop the murders in Srebrenica. They did not stop the Anfal. They have not stopped the attacks on Kurdistan in Iraq by IS. They were a lesson from history that we did not learn.

Worse, one look at the world today shows that it can still happen. It is still happening. As a boy, I saw soldiers bayonetting sacks in case people were hiding inside them. I saw friends and the fathers of friends dragged away, never to be seen again. How many children will see their fathers dragged onto trucks today, or tomorrow? We live in a world where we have clear definitions of international law, and clear limits on what governments may do, but the truth is that these limits are only sporadically enforced. International law applies in practice only to those on the losing end of wars. It has become a club with which to beat ones enemies rather than a genuinely upheld benchmark. Certainly, it did little to protect the Kurds in 1983 or in 1988.

There have been answers proposed for this. Part of the reason my people are so insistent that they should have a fully independent homeland is because history has taught them that they cannot rely on other governments for their safety. Not when those governments have targeted them, imprisoned them, and murdered them on a scale that had not been seen since the Second World War. I feel that an independent Kurdish state is justified for this and many other reasons, but today is not about playing the politics of independence.

An event like this is painful to remember, no matter how much time passes. Yet it is also vital to remember, because of what happens every time we forget. Remember the 8000 men and boys who died on this day in 1983. Remember what happened to them, but also remember that it is never enough to simply say “this can never happen again.” We must make sure it does not. We owe that, not just to those who have died in massacres, but to the future generations who we want to be sure do not.