KRG can do little beyond harsh rhetoric in face of rocket, drone attacks 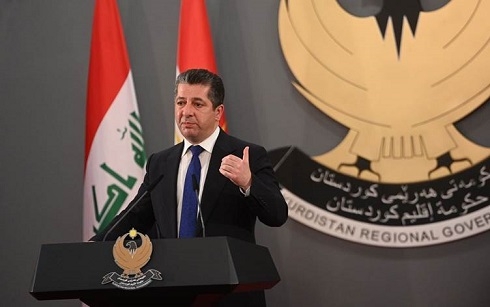 SULAIMANI, Kurdistan Region — Harsh rhetoric is about the only reaction available to the Kurdistan Regional Government (KRG) after repeated rocket attacks on the Kurdish capital, blamed on Iranian-backed Iraqi militias. Factors such as a cautious US administration, disunity in the Kurdistan Region, and regional dynamics make it difficult to mount any meaningful response.

On April 14, Erbil’s International Airport was hit by an explosive-laden drone directed at forces from the Global Coalition against the Islamic State (ISIS) based at the airport. There were no casualties. The attack was preceded by a deadly rocket attack on February 15, when multiple rockets were fired at Erbil, killing two people and injuring several others. The attacks have been attributed to the Iran-backed Popular Mobilization Forces (PMF, Hashed al-Shaabi in Arabic).

The Kurdistan Region is under attack because of its warm relations with the West, according to analysts.

“I would actually say that the kind of attacks that KRG/KDP (Kurdistan Democratic Party) gets from Hashd is just the cost of the strategic alliance between the Kurds in Iraq, KDP and PUK (Patriotic Union of Kurdistan), and United States,” Zmkan Ali, a researcher at the Institute of Regional and International Studies (IRIS), told Rudaw English.

“They [KRG] are very rational. They know who these people are, and they know why they are doing it,” added Ali.

Kamaran Mohammed, a lecturer at Salahaddin University-Erbil’s College of Political Science, agreed. “The dominant explanation for these attacks is that these attacks are against US forces stationed in the Region as part of the US-Iran rivalry in the Middle East,” he said.

The US has some 2,500 military personnel stationed across Iraq, including in the Kurdistan Region. Bases housing these troops, as well as the US embassy in Baghdad’s international Green Zone often come under rocket fire. The attacks have increased in frequency since the administration of former US President Donald Trump assassinated Iranian General Qasem Soleimani and PMF commander Abu Mahdi al-Muhandis in January 2020. The groups have ramped up their attacks to force US troops out of Iraq.

Kurdish and Sunni leadership are supportive of the US remaining in Iraq, mainly to counter Iranian influence and Shiite dominance. Kurds have particularly enjoyed strong support from Washington since the US invasion of Iraq in 2003.

“These kinds of attacks relate to the United States first and foremost. You are a part of this strong alliance, the special treatment that Kurds get in Iraq, from 2003 and increasingly from 2014. It is a price that you have to pay for this alliance,” said Ali.

The purpose of the attacks isn’t to cause a lot of damage, but rather to send a message to the Americans that “you are not safe anywhere in Iraq, even in the KRI [Kurdistan Region of Iraq],” said Ali.

“The KRG, in the depths of their heart, know this is not their war,” he added.

Despite the repeated attacks, including another attack on the Peshmerga along the Erbil-Kirkuk border on March 29, the KRG’s response so far has been limited to harsh rhetoric and naming names. Kurdish security forces published the confession of the alleged perpetrator of the February attack and accused Kataib Sayid al-Shuhada, a PMF faction, of being behind the attack.

The leader of the faction, Abu Ala al-Walayi, responded by sending a threatening message to former president of the Kurdistan Region and head of the KDP Masoud Barzani. “We will work on helping honorable people among Kurds in the Region’s provinces to liberate themselves from your greed and oppression. It is time to put an end to your despicable dictatorship.”

Kurdistan’s counterterror service reacted by labeling Walayi a “terrorist” working to destroy Iraq for the interests of neighboring countries, a veiled reference to Iran.

“The KRG response in terms of rhetoric can be considered harsh, but on the ground, it hasn’t really taken steps or measures to counter the threat from Hashd al-Shaabi. Responses have merely been rhetorical,” said Mohammed.

“This is the limit of what the Kurdish leadership can do. They couldn’t go farther, such as direct confrontation with these groups. All they could really do is respond through rhetoric and arrest a member,” he explained.

A blast from an explosive-laden drone sparked a fire at Erbil International Airport on April 14, 2021. Photo: screengrab

The Kurdish parties know there are lines they cannot cross, so they respond with words, rather than action. “In 2017, they crossed the lines of the US, and see what happened? They lost the disputed territories,” said Ali, referring to the ill-fated independence referendum in 2017 that the KRG proceeded with against the wishes of the US and regional powers.

The KDP needs to show some reaction to show the public and their allies that they can stand up to these attacks, and to send a message to PMF factions, but “It is clear to everyone that the KRG or KDP did not respond because it had to listen to the Biden administration, and the Biden administration said that it is ‘our job to respond’,” said Ali.

The Biden administration has been trying to restart nuclear talks with Iran and allies to salvage the 2015 deal, from which Trump withdrew in 2018, imposing crippling sanctions on Iran. In tandem, the US is engaged in Strategic Agreement talks with Iraq and both sides have already agreed that the US will withdraw its remaining combat troops.

Against this backdrop, Washington does not trying to escalate tensions. That is why, when the US responded to February attack on Erbil attacks, it did so in eastern Syria, both not to escalate with Iran and not to embarrass the Iraqi government. America’s restraint makes it difficult for the KRG to take action.

“Despite this war of words, I don’t think the KDP is interested in an all-out war with the PMF. They just can’t do it. It is too complicated for the KRG to fight this war, but they will have to show that they will stand up for their rights because if you don’t do anything, you will invite more attacks and threats. You have to do something, even if it is minor,” said Ali.

Since the PMF groups are allied with Iran and have friends in Baghdad, the issue becomes a regional one, further tying the KRG’s ands, argued Mohammed.

“Kurdistan cannot really have a unified, cohesive voice towards these groups. These armed groups also have a political-administrative presence in Baghdad. They are the second most powerful faction in the parliament,” added Mohammed, referring to the PMF-linked Fatih Alliance.

A division between Kurds complicates matters even more. The Kurdistan Region is effectively divided into two zones of military and political control, namely the KDP-controlled Erbil and Duhok and the PUK-controlled Sulaimani. The PUK enjoys good relations with Iran, making it difficult for the KRG to take a stance against the PMF.

Like the Kurds, the PMF is not a unified group and the KDP and PUK retain good relations with some PMF leaders who know there are benefits to being friendly with the Kurds.

“The attackers don’t represent all of Hashd, and KDP knows this. It’s people, a network that is tied to Kataib Hezbollah,” said Ali, referring to a powerful Iranian-backed militia.

“KDP and PUK still maintain a strong relationship with key leaders of Hashd, like Hadi al-Amiri, and they have interests in Baghdad. They know that major Shiite forces like Badr and to a certain extent even Asaid [Ahl al-Haq] are not that crazy to go on an all-out war with the Kurds,” added Ali.

The PMF “need the Kurds. KDP and PUK have predictable votes. They have large voting blocs during elections and in the aftermath, in the government formation. They fight over the Kurds,” he said.

These rockets attacks may cease if the US leaves Iraq, but the way in which they depart matters as well. If the US withdraws according to the PMF demands – quickly and absolutely – then it could lead to increased tensions in the country. “However, if the US leaves through a long-term, strategic agreement with the Iraqi government, and providing the government with international support to establish monopoly over use of violence in the country, then Kurdistan wouldn’t really be very worried about the future,” said Mohammed.

A US-Iran deal and thawing their relationship could also help to stop these attacks, argued Ali. “The Americans won’t sign a deal that doesn’t include the Iranians reining in these militias and changing the course of their action,” he said.

“2011 is different to now,” said Ali, referring to the last withdrawal of US troops from Iraq. “Now, Iran’s allies are powerful on the ground, but they are not that powerful. There are a lot of challenges from the protest movement, from the people, from the Shiite population.”

In October 2019, mass demonstrations erupted across southern Iraq with mainly youth protesting against corruption, nepotism, and lack of services. They demanded systematic change and condemned foreign intervention, particularly from Iran. The militias responded with coercive measures to silence the protests, including shootings and assassinations. Over 600 people have been killed. The protests are continuing, albeit on a smaller scale.

If the US withdraws completely and leaves Iraq, Iran won’t take over, said Ali. “Even if it [Iraq] is abandoned, the circumstances on the ground have changed. People have different opinions and ideas about these political parties and their militias, about Iran, and even about Americans. It won’t be the case that they will rule the way they want and as they wish.”

The PMF “have to make concessions.”


Mohammed Rwanduzy is an independent political observer and analyst.