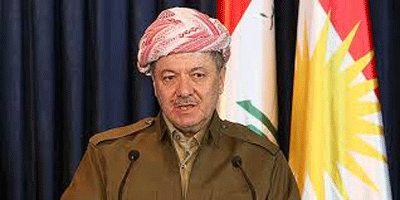 ERBIL, Iraq — Iraq's autonomous Kurdistan region should hold a non-binding referendum on independence, its president said on Tuesday, despite the numerous crises it is facing.

Massoud Barzani has previously called for a referendum but set no timetable for a proposed vote.

The chaos created by Islamic State's occupation of swathes of Iraq and Syria has given Kurds a chance to further their long-held dream of independence. But the region is currently struggling to avert an economic collapse.

"The time has come and the situation is now suitable for the Kurdish people to make a decision through a referendum on their fate," Barzani said in a statement on his website.

"That referendum does not mean proclaiming statehood, but rather to know the will and opinion of the Kurdish people about independence and for the Kurdish political leadership to execute the will of the people at the appropriate time and conditions."

In recent years Iraq's Kurds have sought to maximize their autonomy, building their own pipeline to Turkey and exporting oil independently as relations with the federal government in Baghdad frayed over power and revenue sharing.

The global slump in oil prices however has compounded existing economic problems, bringing the region to the point of insolvency.

Regional powers have historically opposed Kurdish aspirations for independence, especially neighboring states with large Kurdish minorities of their own. The United States also says it wants the Kurds to remain part of Iraq.

Some view such calls for independence as an attempt to divert attention from internal issues and rally Kurds behind Barzani, whose mandate as president expired last year, but remains in office.

"The same way that Scotland, Catalonia and Quebec and other places have the right to express their opinions about their destiny, Kurdistan too has the right, and it's non-negotiable".