The UN Should Raise Kurdistan's Flag 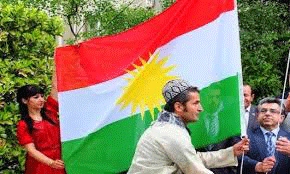 Last year, news that the United Nations was raising the Palestinian flag alongside the flags of recognized nations of the world made headlines. Israel opposed the move, while many Islamic and Western nations celebrated alongside the Palestinian Authority, believing that this gave them legitimacy and was a way to advance the two-state solution. I am opposed to what the UN did for obvious reasons. The PA still refuses to accept Israel's right to exist as a Jewish and democratic state; won't give up on right-of-return for Arab "refugees" to return to land now recognized as Israel; refuses to acknowledge that Jerusalem is Israel's undivided capital for all eternity; and engages regularly in a campaign of incitement that provides a motive for terror. But if the UN will raise this flag and recognize "Palestine" as a state, it should do the same for Kurdistan.

While the Kurds may not have a recognized state at the moment, they are, for all intents and purposes, a country right now. While Iraq and Syria are dissolving into chaotic hellholes of terrorism and sectarian violence, the Kurds are successfully self-governing their autonomous regions in both countries. Arbil, Kurdistan's capital city, is beautiful and modern, while Damascus and Baghdad are third-world pits. It is shameful that the West has abandoned and forgotten the Kurdish people who have been so pro-democracy, pro-Western, and pro-Israel. The Kurds were promised their own state back in the last century, but were cheated by the British. And once again, the US government, European Union, and United Nations instead throw their backing behind Arab dictatorships like Saudi Arabia, which oppresses women and executes gay people. Most recently, it has even begun the earliest stages of opening up ties with Iran, a radical regime that threatens to destroy Israel, America, and Britain and represses its people's freedoms. Furthermore, the Obama Administration and many of its Western allies remain committed to a vision of a unified Iraqi state, and likely the same for Syria, once conflict there ends. This disturbing continuous embrace of the Sykes-Picot Agreement from 100 years ago is an embarrassing failure for the Western World.

While the Kurds still have some hurdles to overcome--notably their clashes with and oppression of Yazidis, in many cases--they are far more advanced than their Arab neighbors when it comes to equality or freedom. Women serve in the Peshmerga (Kurdish armed forces) and often don't wear the hijab. Indeed, in light of dealing with ISIS, Iran, and an increasingly radicalized Turkey, many Kurds are returning to their traditional religion of Zoroastrianism (or converting to Christianity) instead of continuing to be Muslim. And despite occasional conflict between political parties in the divided and occupied Kurdish nation, which sometimes threatened its democracy and led to war, the US stabilized and aided its people, bringing an end to conflict and helping the Kurds develop an autonomous region in Iraq. Now in Syria, as the Kurds seize land from ISIS in the north along the Turkish border, they are building on the possibility of having an autonomous Kurdish region there as well, free from conflict. This could be the first step towards uniting into one country and possibly fighting Iran and Turkey for independence there as soon as the more immediate threat from Sunni jihadists like ISIS comes to an end.

The Kurds face a number of challenges. Syrian President Bashar al-Assad vows to "reconquer" the entire country, and is getting plenty of help from Russia, Iran, and Hezbollah in doing so; just a few months ago, this was unthinkable. Secondly, Turkey has focused its bombing and shelling mostly on Kurds in northern Syria, in addition to occupying northwest Kurdistan and oppressing the people there. And finally, the West is more preoccupied on creating a Palestinian state, the Iran nuclear deal, and finding a way to stop the Syrian Civil War than in recognizing that the Kurdish people have a right to independence after over 5 centuries of oppression and occupation. For some strange reason, EU, US and UN leaders have failed to recognize that the establishment of a Kurdistan could lead to regional stability that will serve their interests in the region. In the past, the US has backed groups in this part of the world that have turned against them, often times from feeling abandoned after "serving its purpose", or because the US leadership never really understood that these were never "moderate" forces. And yet despite being largely ignored, the Kurds remain very pro-US and pro-Western. With the Peshmerga already recognized as the most effective fighting force against ISIS right now, an independent Kurdish state, which probably would be a democracy, has the capability to defeat ISIS and smaller jihadist groups involved in the current war in Iraq and Syria. It could also keep Turkey, Iran, and the Arab World in check, particularly if it aligns itself with Israel. The Kurds could also market their country as a tourist destination, boasting some of the most beautiful mountainous scenery and hiking trails in the world, and be an alternative oil market to backwards Arab countries (or possibly, Iran and Russia) that most countries reluctantly make their fossil fuel purchases from. And it could fulfill its historic role as a refuge for minority groups that would be persecuted or killed in surrounding nations, which would mean less refugees for Turkey or Europe to take in.


There's still a long way to go. While Kurdistan is far more open than the Arab World, Pakistan, or Afghanistan, women still don't have the same kind of rights that they do in Israel or Western nations. Honor killings are still common, despite laws against this. Furthermore, oppression leads to high suicide rates for women, and there aren't enough resources for those who suffer from abuse or FGM. And in addition to all this, the Yazidis still face persecution. The West needs to do more to pressure the Kurds to advance on these issues through a social revolution that will change the way women and Yazidis are viewed and provide more resources for these communities, or integrate them into society more successfully. But instead of wasting more time on pressuring Israel to make peace with a "partner" that incites extremism and terrorist rhetoric against Israelis, The West should realize there is a better, more realistic and useful two-state--or perhaps, five-state--solution, and one that, unlike "Palestine", would serve its interests in many ways. So I call upon the United Nations to raise the Kurdish flag alongside the various other flags in front of the iconic buildings. It's time to right this historic wrong, stand with our real allies, and give peace a shot by helping them secure the region.