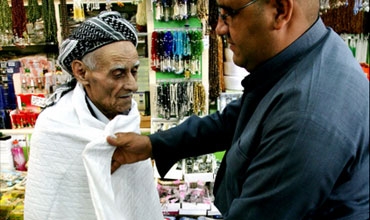 More than 2 million people are expected to visit Saudi Arabia to take part in the pilgrimage this year; Iraq is allowed to send 36,000 people, and within this number 4,650 pilgrims will be from Kurdistan region.

Pilgrims' names in Kurdistan region were registered by the Ministry of Endowment and Religious Affairs (MOERA), and the first crew is expected to fly from Erbil and Suleimaniya airports toward Jidda city in Saudi Arabia on October 10.

In their first preparation for this year, Saudi Arabia notified their neighboring countries including Iraq to send their people to Jidda by vehicles. But after several serious attempts, Iraqi and Kurdish officials were able to persuade their Saudi Arabian counterparts to allow Iraqi people travel via air.

"We as a ministry have done all the preparations; we have booked hotels and received visas for our pilgrims. We plan to send the first crew of our pilgrims on October 10," said Salah Sheikh Fattah Naqishbandi, general director for Hajj and Umrah Affairs at the Kurdistan region's MOERA.

Naqishbandi added, "I don't think we are going to face any difficulties since we have formed a committee consisting of seven people who recently reached Saudi Arabia in order to receive and guide our pilgrims upon their arrival to the country."

According to Naqishbandi, the only problem that may occur is the delay of the travel due to external reasons. Though the pilgrims are expected to travel on 10th of this month, they can't move without being notified by the officials in Saudi Arabia.

Aiming to be certain about the health condition of the pilgrims, Kurdistan region's Ministry of Health (MOH) has opened 16 health centers. According to Dr. Khalis Qader, MOH media manager, all the pilgrims have already been tested and are in good health.

Due to the great demand by Kurdish people to undertake Hajj, a large number of people annually register their names--but MOERA performs a draw to choose only the limited number decided by Saudi Arabia.

Hajj is the largest pilgrimage in the world and the fifth pillar of Islam, a religious duty that must be carried out at least once in a lifetime by every able-bodied Muslim who can afford to do so. The Hajj is a demonstration of the solidarity of the Muslim people and their submission to God.

Since it is impossible for all the people who registered their names to undertake Hajj, thousands of people in Kurdistan region resort to undertaking Umrah at different times.

Umrah can be undertaken at any time of the year. Umrah basically means "to visit a populated place." It is sometimes called the minor pilgrimage or lesser pilgrimage, the Hajj being the major pilgrimage that is compulsory for every able-bodied Muslim who can afford it. The Umrah is not compulsory but highly recommended.

The shortage of planes and the delay issues are also the main problems Kurdish people have been suffering from for the last couple of years. This year about 52,000 people have undertaken Umrah.

Karzan Abullah is one of the men who undertook Umrah this year. "We were stuck in Saudi Arabia for 10 days even after finishing all the duties of Umrah due to lack of planes. We suffered a lot and always thought of our families. The long-lasting journey actually cost us more than we expected."

The stuck people couldn't stand missing their families any longer; they demonstrated and protested for the delay. Finally, after 10 days, the protest worked and urged the Umrah organizers to dedicate planes and send the people back to Kurdistan.

Meanwhile, Muhammad Hussein, a supervisor of Salahaddin Company for Hajj and Umrah issues, said, "There is no plan actually to organize the journey. There are only a few planes, which are very old and are not capable of transferring a huge number of people. The number of planes generally is very few compared to the number of people."

Naqishbandi also said that MOERA only gives licenses to the companies, and they try to help people with visa issues. "The ministry isn't responsible at all for the journey problems. Lack of planes and delay issues should be addressed to Saudi Arabian officials and the members of the Iraqi High Committee for Hajj and Umrah issues."
You can share it :
Share to FacebookFacebook