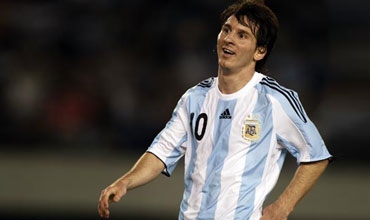 AFP
This goal will be important for Lionel to lay to rest this apparent collective psychosis that he can't do the business with Argentina,"
New Argentina coach Alex Sabella says his side have laid their Lionel Messi "psychosis" to rest after opening their World Cup qualifying campaign with a 4-1 win over Chile on Friday.

Barcelona superstar Messi was at his majestic best - following on from some below-par showings in the national shirt - scoring once in a display which saw the Argentinians cast off the demons of a failed July Copa America campaign on home turf.

Messi, who scored goals for fun as Barcelona terrorised teams at home and in Europe all season, cut a dejected figure at the Copa, save for a fine group phase showing against Costa Rica, and that prompted some observers to ask if he would ever really fit into the national team.

But after his performance on Friday Sabella insisted things were now clicking.

"This goal will be important for Lionel to lay to rest this apparent collective psychosis that he can't do the business with Argentina," said Sabella, who succeeded Sergio Batista after the Copa America.

"But this (scoring) is not a worry anyway as he is always extraordinary and if he does not score he comes up with the move which enables someone else to," Sabella observed.

Messi notched the second goal and was generally a thorn in Chilean flesh although many of the plaudits went to Gonzalo Higuain, the Real Madrid striker netting a hattrick at the Estadio Monumental in Buenos Aires.

Before the match Sabella had praised Messi effusively, saying of his captain: "In general terms, Messi never plays badly. The only thing is that you always have to evaluate his performances in a general context.

"There are many games in which Messi has shone for Argentina, but because he hasn't perhaps been decisive people are left thinking that he has not played as well."

But Sabella says they provided a stiff test.

"They attacked and were aggressive - but we concentrated and were solid," said the former Sheffield United man.

Argentina have not lost a World Cup qualifier at the venue for 18 years and Higuain, two of whose goals were laid on by Real club-mate Angel Di Maria, noted "it was important to get off on the right foot and we did just that. Now we have to keep this up."

On Tuesday, Argentina, looking for one of four automatic regional qualifying slots -- Brazil as hosts are guaranteed a berth and one more is available via the playoffs -- travel for their second qualifier to Venezuela, surprise Copa semi-finalists in July but who went down 2-0 in Ecuador.

Copa America winners Uruguay got their qualifying campaign off to a perfect start meanwhile with a 4-2 home win over modest Bolivia 4-2 in Montevideo.

Oscar Tabarez's side took the lead after only three minutes when Liverpool striker Luis Suarez netted after the Bolivian defence had failed to deal with a Diego Forlan corner.

Bolivia came up with a shock equaliser, Rudy Cardozo clipping the ball over goalkeeper Fernando Muslera.

La Celeste, World Cup winners in 1930 and 1950, restored their lead when captain Diego Lugano headed a Forlan free-kick past Carlos Arias in the Bolivia goal.

Inter Milan's Forlan needs just one goal to become Uruguay's all-time leading scorer, but it was Lugano that bagged his second and his team's fourth from close range midway through the second-half.

Marcelo Martins pulled another goal back for the visitors with a penalty.

Peru, who denied the Venezuelans third place at the Copa, thanked two goals from Jose Guerrero, meanwhile, as they saw off Copa runners-up Paraguay 2-0 at home.

Last time out the Peruvians, who in midweek face Chile away, finished bottom of the continental group.
You can share it :
Share to FacebookFacebook