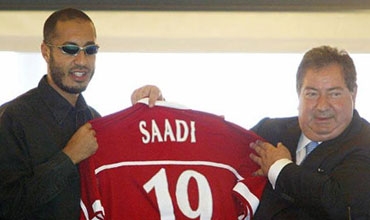 Libya’s interim leaders have approved a request to open an investigation into Muammar Qaddafi’s son Saadi over the murder of a footballer who played for the national team in the 1980s, prosecutor Abdullah Banoun said on Wednesday.

Banoun told people gathered at the player’s club for a memorial service that the National Transitional Council (NTC) had agreed the investigation into the murder of former midfielder and coach Basheer Al-Rryani could go ahead.

Rryani was known as ‘number nine’ because of a law forbidding any players but Saadi Qaddafi, who had a brief career as a soccer player, from being mentioned by name. He was tortured and killed in December 2005.

During the Qaddafi-era there had been no independent judiciary and no attempt had been made to investigate the role of Saadi Qaddafi, who is also the subject of an Interpol arrest warrant, the prosecutor said.

After the uprising against his father’s rule, Saadi Qaddafi sought refuge in neighboring Niger, where the government says it has him under surveillance but says it is unlikely to extradite him any time soon to a country where he would not be given a fair trial and risked the death penalty.

Saadi is accused of leading military units responsible for crackdowns against protesters and misappropriating property.

Rryani had coached at Saadi Qaddafi’s club for several years after playing for Libya’s national team between 1975-1983.

Friends attending the memorial remembered Rryani as an outspoken critic of Qaddafi’s regime and said he had been attacked on one occasion before his death.

“Two years before he was killed he told Saadi he was part of a dictatorship and had corrupted Libya. After that he was beaten and left outside his house,” said Dr Hussein Rammali, a former team-mate who attended Wednesday's ceremony.

Rammali said Rryani’s family had last seen the star at Saadi Qaddafi’s seaside resort four days before his body was returned to their home.
You can share it :
Share to FacebookFacebook