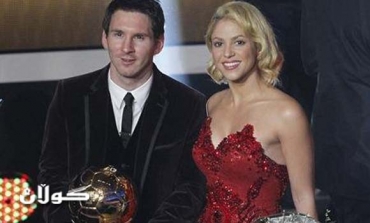 ZURICH (Reuters) - Lionel Messi's exploits with Barcelona won him the World Player of the Year award for an unprecedented third year in a row on Monday at the age of 24.
The Argentine swept home with 47.88 percent of the votes in the survey among national team coaches, captains and selected media, receiving the trophy from former Brazil striker Ronaldo, himself a three-times winner of the award though not successively.
Although FIFA listed only the players' nationality when they published the full results, it was clearly Messi's stunning performances for Barcelona which earned him the plaudits.
Messi, followed by Real Madrid forward Cristiano Ronaldo and Barcelona team mate Xavi in the poll, was last season's top scorer in the Champions League with 12 goals in Barca's triumphant campaign and netted 31 times as they won La Liga.
By contrast, he was roundly criticised after Argentina, hosting the Copa America, went out in the quarter-finals to Uruguay in July.
Meanwhile, Uruguay's exploits in winning the Copa America failed to earn them a nomination in the coach and players' shortlists, or even a mention in the team of the year.
Uruguay coach Oscar Washington Tabarez was fifth in the coach of the year poll, won by Barcelona's Pep Guardiola.
Manchester United's Alex Ferguson was second and Real Madrid's Jose Mourinho third.
Former France captain Michel Platini said afterwards Messi would still have to shine for Argentina before he could be considered among the greats.
"Look at Diego Maradona, everyone remembers what he did in 1986, nobody remembers so much what he did with Napoli, with Barcelona," Platini, president of UEFA, told reporters.
"It's still the World Cup which still sticks in people's minds.
"Messi will always be great with or without the World Cup ... but the World Cup does something special."
Before the ceremony, Messi, who has played in two World Cups and seen Argentine lose in the quarter-finals to Germany on both occasions, admitted Argentina were not at their best.
"The reality is that we are very far from being the best national team in the world," he told a news conference.
"There are many in front of us but we have the ambition and the desire. There is still a lot of time to go before (the next World Cup in) 2014 and we have to improve a lot but we will get there."
OUTSTANDING SERVICE
Brazil and Santos forward Neymar won the award for the goal of the year, a stunning effort in a Brazilian championship match against Flamengo, while Ferguson took the FIFA presidential award for outstanding service to the sport.
The ceremony, co-presented by former Netherlands striker Ruud Gullit, also featured Japan's Homare Sawa being voted women's player of the year, ending a run of five successive wins for Brazil's Martha.
Norio Sasaki of Japan won the women's soccer Coach of the Year award after his side won the World Cup.
Beforehand, Martha had made her familiar appeal for more support for Brazilian women's football.
Despite her personal awards, Brazil have never won a World Cup or Olympic title and does not have a professional women's league.
"I do what I can, but it has to come from everyone, especially from the media, because without media there is no sponsorship, and from the federation," she said.
"There are lots of people who could do something to improve the structure of women's football in our country, we have been pushing for a long time but it doesn't just depend on us."
You can share it :
Share to FacebookFacebook