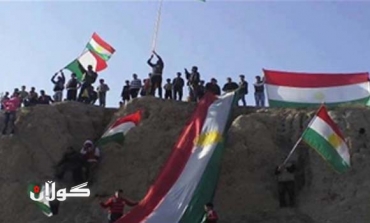 On the second day of events in Syrian Kurdistan, several more cities have fallen into the hands of Kurdish groups.

Fawzi Shangal, the leader of the Kurdish Accord Party in Syria told Rudaw that the city of Amude and Efrin fell on Friday and they expect Derek city liberated within hours.

Shangal maintained that the Kurdish cities fell without any major clashes. The forces of the Assad regime withdrew from the area, he said.

“According to the Erbil agreement [signed between Syrian Kurdish political factions] On June 11, the Kurdish National Council and the Council of Western Kurdistan have formed a joint leadership to run those cities,” he said.

Members of the Democratic Union Party [PYD] raised the Kurdish flag alongside the official flag of the Kurdistan Workers Party [PKK] on all government buildings in the newly liberated cities on Friday.

Kobane, in the province of Halab [Aleppo], was the first Kurdish city near the Turkish border to be liberated yesterday.

On Thursday PYD stopped soldiers of the Free Syrian Army [FSA] from entering Kobane as the news of the liberation reached other parts of the country.

“The Kurdish forces rejected a request by the FSA and told them that they [Kurds] can control their own areas,” Hussein Kochar, a PYD official told Rudaw.

Kurdish leaders are preparing for the full liberation of Syrian Kurdistan and the responsibility of restoring peace and order in those cities.

Ismail Hama, the current head of the Kurdish National Council said achieving an agreement between the different factions wasn’t easy, but it was necessary.

“Things are changing in Syria and those changes affect us all,” he said. “We have to be united and it was those developments in Syria that made us put our differences aside and form this council.”

“PYD’s stance against the FSA is rigid,” he said. “There are different parties behind the FSA, among them Turkey, Saudi Arabic and Jordan. Kurds are against those forces from coming to Kurdistan and we support PYD in that regard and believe a special Kurdish force has to be created.”

Mustafa Juma, the head of the Kurdistan Freedom Party [Azadi] said Kurdish groups faced many challenges to reach the agreement they signed in Erbil; therefore all sides have to respect and implement its articles.

“Kurds in western Kurdistan were very worried recently because despite our past sufferings, Kurdish groups were close to a civil war,” he said. “But that agreement makes everyone happy.”

The PKK-affiliated PYD is the dominant force in Syrian Kurdistan and their members run checkpoints on major roads and entrances to Kurdish cities.

But Nuri Brimo, spokesperson for the Kurdistan Democratic Party of Syria said on Thursday, to run the Kurdish areas all groups have to work together.

“PKK alone cannot run western Kurdistan,” he said. “There is no other way but unity and only that way can we achieve our goals.”

Qamishli, the largest Kurdish city in Syria is still under control of Syrian forces, but Kurdish leaders expect the army to pull out of the area, as fierce battles between rebel fighters and the Assad regime have been raging in the capital Damascus since Tuesday.
You can share it :
Share to FacebookFacebook