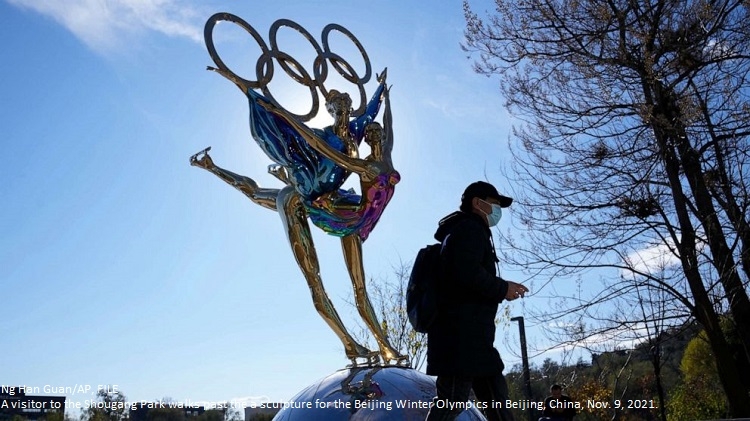 The U.S. will not send an official delegation to the Winter Olympic Games in China early next year, the White House announced Monday, citing China's human rights record.

The diplomatic boycott means that U.S. athletes will still compete in the games, which will start in Beijing in February.

The Chinese government responded with swift condemnation of President Joe Biden's decision -- saying the Olympics shouldn't be "a stage for political shows" and warning of "resolute countermeasures."

But the Biden administration said it would not send senior U.S. government officials because of China's mass detention camps and forced sterilization campaign against Uighurs and other Muslim ethnic minorities in the country's western province -- policies that the U.S. government has determined constitute genocide and crimes against humanity.

Biden has been under growing pressure domestically to take some kind of action against the Beijing games because of China's increasingly authoritarian policies at home and aggressive actions across the region. The decision to not send a delegation stops short of an outright boycott of the games, as U.S. athletes will be participating.

"The athletes on Team USA have our full support. We will be behind them 100 percent, as we cheer them on from home," said White House press secretary Jen Psaki, but the administration didn't think "it was the right step to penalize athletes who have been training, preparing for this moment."

“We will not be contributing to the fanfare of the games,” Psaki said.

Sending prominent officials or public figures to the Olympics is a long tradition, with first lady Jill Biden leading a delegation to the summer Olympics in Japan this year.

The Biden administration has said it is consulting U.S. allies on a path forward, but so far, no other country has announced a similar diplomatic boycott. Psaki said the U.S. informed allies of the decision before announcing it. Australia, Canada, the United Kingdom, and others are said to be weighing boycotts as well.

Beijing has repeatedly blasted any talk of a boycott, denouncing it as an affront to the "Olympic spirit" while denying any wrongdoing in its human rights record.

It's also unclear if any American officials were formally invited to the games, where they usually attend the opening or closing ceremonies. Zhao said Monday that "American politicians" were not invited, without specifying who exactly or whether foreign delegations in general were.

Biden has tried to stabilize U.S.-Chinese relations, which have nosedived in recent years as Washington has grown increasingly concerned about Chinese aggression. He and Chinese leader Xi Jinping held a meeting last month via video teleconference, marking small progress on issues like China's travel bans on dual citizens and journalists visas.

But tensions have remained high over China's development of hypersonic and nuclear weapons, its menacing of Taiwan, and its human rights record, from the crackdown on democracy in Hong Kong, religious practice across the country, and especially the Uighurs in Xinjiang province. The detention of over one million Uighurs, the sterilization of Uighur women, and their forced labor in these camps has drawn U.S. sanctions and international condemnation.