Iraq calls for direct talks between Iran and US 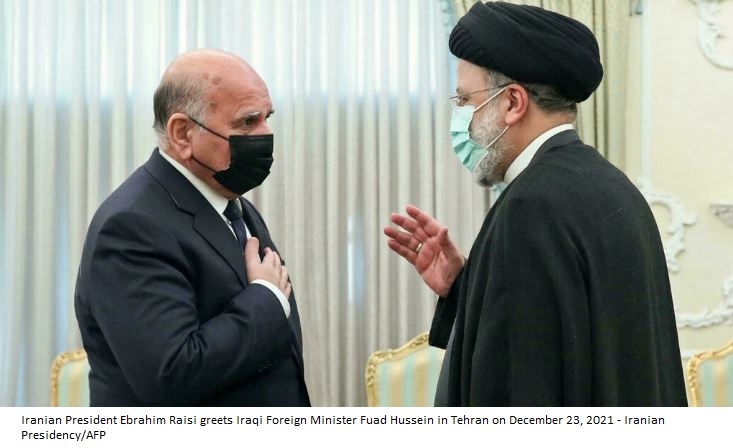 Iraq's foreign minister said on a visit to Tehran Thursday that the time has come for the Islamic republic and the United States to negotiate directly on Iran's nuclear ambitions.

US-Iran relations have been severed since April 1980, just months after the fall of the shah and the occupation of the American embassy by Islamist students loyal to Ayatollah Ruhollah Khomeini.

They worsened significantly after US president Donald Trump's 2018 decision to unilaterally withdraw from the nuclear deal and impose sanctions on Tehran.

Negotiations resumed in November after a five-month hiatus to try to restore the deal, which gave Iran sanctions relief in exchange for curbs on its nuclear activities.

Diplomats from the remaining parties to the deal -- Britain, China, France, Germany and Russia -- are in talks in Vienna with Iran and the US, with the two sides refusing direct contact.

"We call for, and this is no secret, direct negotiations between the two parties," Iraqi Foreign Minister Fuad Hussein told a joint press conference.

"Iraq's interest is in helping the two parties to sit round a table and talk," he said.

"We have proposed this to the Americans and have made this proposal (to Iran) and even before our visit to Tehran.

"It is better that a direct meeting take place between the American party and the Iranian party," Hussein said.

He said Iraq felt there was a "problem" with the negotiating mechanism at the Vienna talks.

"The negotiations with the American side are indirect, through the European envoy," he said.

"We think the time has come for direct talks between Washington and Tehran to reach common understandings not just on the nuclear issue, but also on sanctions.

"We need direct contact between the two parties and we are working towards that," Hussein said.

Iraq is Iran's neighbour, and Hussein said US-Iran relations "are not an external matter for Iraq, but an internal one".

He said tensions between the long-time foes impacts directly on the political and security situation in Iraq, and that detente between the two would have a positive effect.

"The Americans send unwritten messages to meetings and receive responses" indirectly from Iran, he said.

"As for the Islamic republic, we seriously declare that we want to reach a good agreement and we hope the other parties also come and negotiate with the same seriousness and the same goodwill," Amir-Abdollahian said.

The Vienna talks are set to resume on Monday after a 10-day break.

On Thursday, EU diplomat Enrique Mora, who is chairing the negotiations, said he hoped for speedy progress.

"Important to pick up the pace on key outstanding issues and move forward, working closely with the US. Welcome to the 8th round," Mora said in Vienna.