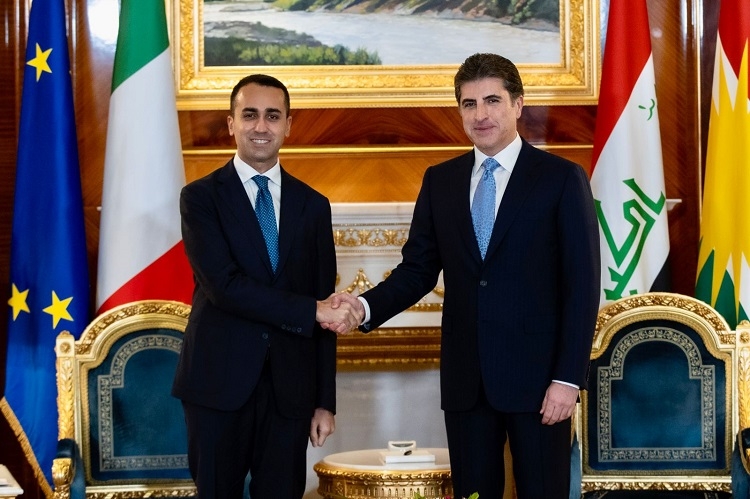 At the meeting, attended by Italy’s Ambassador to Iraq and Italy’s Consul General in Erbil, Foreign Minister Di Maio highlighted his visit to Italy’s troops stationed in Iraq and reaffirmed his country’s continued commitment to supporting Iraq and the Kurdistan Region. Mr. Di Maio commended the role and contributions of the Peshmarga forces in defeating ISIS and lauded the hospitality of the Kurdistan Region accommodating refugees and the displaced people. During the meeting, Foreign Minister Di Maio conveyed a formal invitation to President Nechirvan Barzani to visit Italy.

The President and Foreign Minister Di Maio reaffirmed willingness to further strengthen bilateral relations and to expand areas of mutual collaboration, particularly in the fields of economic partnership and cultural exchange.

President Nechirvan Barzani offered Christmas and New Year’s greetings to the Foreign Minister, the people and the government of Italy, and reiterated the Kurdistan Region’s appreciation for Italy’s support to Iraq and the Kurdistan Region in the war against ISIS and the training of Peshmarga forces, as well as Italy’s humanitarian assistance.

Discussions also focused on political developments in Iraq, the recent parliamentary elections, the election results and the ongoing efforts to form the new government. The latest developments in the war against ISIS and the threats posed by terrorism, Erbil-Baghdad relations and the current talks between them aimed at resolving the existing disputes were also highlighted. The regional developments, the importance of preserving peace and stability in the wider region and other topics of mutual interest were discussed.