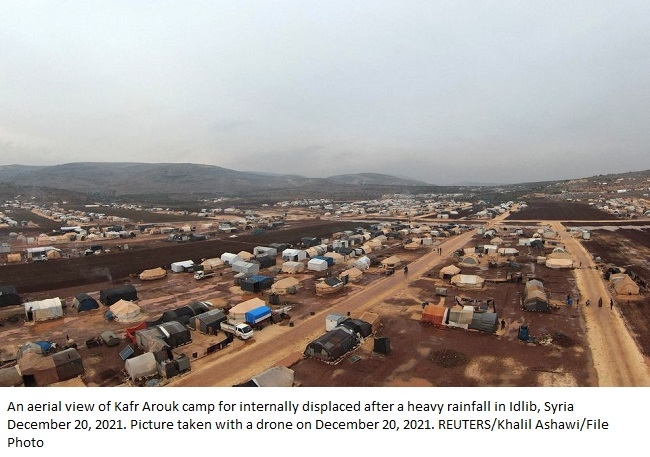 War planes flying at high altitude, which tracking centres said were Russian Sukhoi jets, dropped bombs on several towns and a main water pumping station serving the overcrowded city of Idlib, whose wider population is more than a million.

No immediate comment was available from Russia or the Syrian army, which says it targets the hideouts of militant groups who control the region but deny any attacks on civilians.

An official at the city's water utility service said it was out of action as a result of the strikes.

A senior U.N. official who confirmed the water station was "badly damaged" in an air strike said such attacks worsened the humanitarian plight of millions of displaced Syrians.

Witnesses said the strikes in the last 24 hours in the rebel-held enclave also hit livestock and poultry farms close to the Bab al Hawa border crossing with Turkey.

"The Russians are focusing on infrastructure and economic assets. This is to add to the suffering of people," Abu Hazem Idlibi, an official in the opposition administration, said.

Other targets included villages in the Jabal al-Zawiya region in the southern part of Idlib province, with no immediate reports of casualties, residents and rescuers said.

A series of raids after midnight on Saturday hit makeshift camps that house thousands of displaced families near Jisr al Shuqhur, west of Idlib with two children and a woman were killed and 10 civilians wounded, the civil defence service said.

There has been a relative lull in air strikes since November after a renewed Russian-led campaign followed by Turkish army reinforcements inside the enclave raised the prospect of a wider resumption of violence.

A deal brokered nearly two years ago between Russia, which backs Syrian President Bashar al Assad's forces, and Turkey, which supports opposition groups, ended fighting that had displaced more than a million people within a few months.