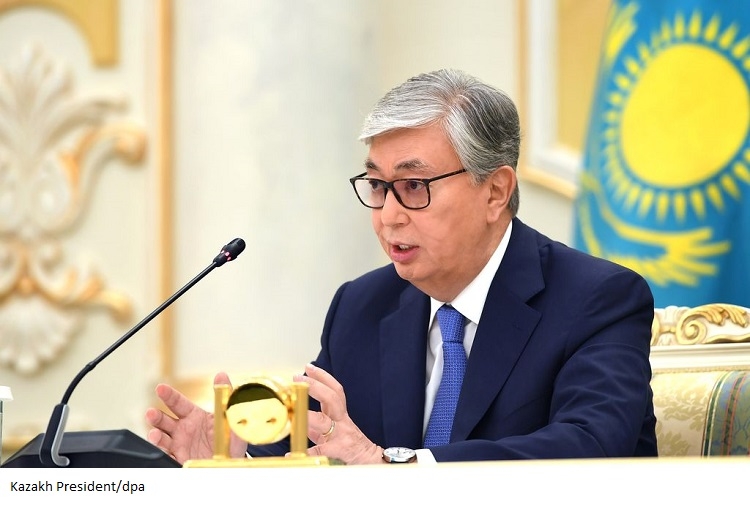 The toll of severe unrest in Kazakhstan remained unclear on Saturday, as President Kassym-Jomart Tokayev appeared to consolidate power further by firing the deputy secretary of the influential Security Council.

More than 4,400 people have been detained nationwide, the state broadcaster reported, citing the Interior Ministry.

There was no official update on the death toll, a day after Tokayev issued a shoot-to-kill order against protesters threatening his authoritarian government's survival.

Previously, authorities had said over 40 people have died so far, including members of the security forces.

It is feared that the true number of deaths could be much higher.

Almaty, Kazakhstan's biggest city and economic hub, has now seen days of rioting, including the torching of government buildings and mass looting.

Getting information out of the city remains near-impossible because authorities have shut down the internet and mobile phone connections are unreliable. Gunfire can be heard in videos posted on social media, although this footage cannot be independently verified.

According to state broadcaster Khabar 24, the so-called anti-terror operation to quell the protests is ongoing.

Kazakhstan's commissioner for children's rights, Aruzhan Sain, said an 11-year-old boy was shot and killed while walking with his parents in Almaty. It was not clear who fired the shot.

Tokayev ordered that Monday be a day of national mourning to remember "the many victims of the tragic events in some parts of the country," according to state media.

The Central Asian country's largest wave of protests in years was triggered by resentment over significantly increased fuel prices at petrol stations. The former Soviet republic is rich in oil and gas and has a population of more than 18 million inhabitants.

In response to the protests, Tokayev dismissed the government before the military intervened in Almaty late Wednesday.

The 68-year-old also took on the leadership of the Security Council, removing Kazakhstan's first president Nursultan Nazarbayev from the powerful post.

Even after stepping down in 2019, Nazarbayev was broadly considered the most powerful figure in Kazakhstan.

Tokayev has replaced intelligence leaders with his supporters, a move that has prompted some to suggest he is using the crisis to gain power.

"It looks increasingly likely that ... an internal coup is under way, liberating Tokayev from the guardianship of Nazarbayev," wrote Alexander Baunov, an expert at the Moscow Carnegie Center.

A Russian-led military alliance of former Soviet states, the Collective Security Treaty Organization (CSTO), has sent in paratroopers to Kazakhstan as part of a peacekeeping force.

In total, some 2,500 foreign soldiers are to be sent to Kazakhstan, the CSTO alliance said.

Russian President Vladimir Putin, in a Saturday video call with Tokayev, supported his suggestion of a CSTO summit in the coming days to discuss the unrest.

Belarusian strongman Alexander Lukashenko, who has cracked down on anti-government unrest in his own country, also talked to Tokayev on Saturday.

The European Union's foreign policy chief, Josep Borrell, issued a statement on Saturday expressing concern over the violence with which the "peaceful protests" were met in Kazakhstan.

"We deeply regret the loss of life and strongly condemn the widespread acts of violence. It is important to prevent further escalations, to avoid any incitement to violence, to exercise restraint at all times, and to avoid exploitation of unrest for other purposes," Borrell said.

He also called on "outside military support [to] respect the sovereignty and independence of Kazakhstan as well as the fundamental rights of all citizens."