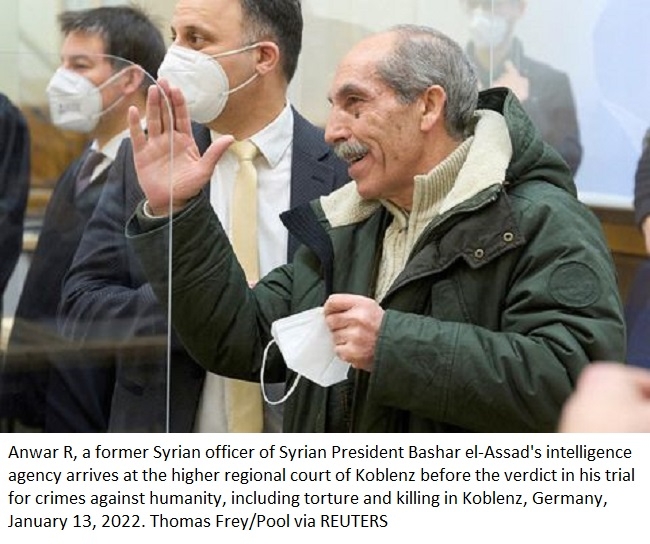 Syrian rebel and opposition groups said Germany's conviction of a former Syrian intelligence officer for crimes against humanity this week was welcome but was only a step towards holding to account President Bashar al-Assad and his top aides.

The conviction of Anwar Raslan, who defected to Syria's opposition in 2012 before securing asylum in Germany, marked a landmark ruling related to state-backed torture committed during Syria's decade-long civil war.

But opponents of Syria's government said cases against lower ranking officers should not distract from more senior targets.

"We welcome the justice of the German court ... but we also warn against the selective justice that pursues small killers and fugitive criminals from the network of terror and authoritarianism," said Mustafa Sejari, a rebel commander and former detainee.

"Justice begins by holding and pursuing Assad and his top henchmen, aides and supporters of his crimes," said Sejari, head of the political bureau of the Syrian Front for Liberation, a mainstream rebel group operating in the last rebel enclave.

Raslan, 58, was convicted on 27 out of 58 counts of murder, rape and sexual assault carried out at a Damascus prison run by a unit of the security services he led. He denied the charges.

Syria's Information Ministry did not immediately respond to an emailed request for comment on the Raslan case that was sent during the Syrian weekend, which starts on Friday. There was no immediate sign of any official reaction in Syrian media.

The Assad government routinely denies torturing prisoners and says its forces have been waging a fight against rebels and Islamists who it accuses of terrorising the population.

Fadel Abdul Ghany, head of the Syrian Network for Human Rights, which helped prosecutors and compiles casualty lists, said the conviction showed "these are crimes of a systematic widespread nature that cannot be carried out by individuals without being a central policy of the Syrian regime".

Mohamad Sabra, a former opposition negotiator, wrote on Twitter: "It's a victory for the principle of accountability and a small step ... on the path of holding to account all perpetrators of war crimes and violators of human rights in Syria."

Syria's conflict began with protests against Assad's regime in 2011, when uprisings flared across the Middle East against authoritarian leaders. It swiftly descended into all-out war.

Assad has now regained control of much of the territory initially lost to rebel and Islamist fighters, helped by Syria's ally Russia. Rebels still hold out in a small, northern area.

Millions of people have been displaced in the war, tens of thousands have died and cities and towns have been devastated.

Raslan's trial was held under Germany's universal jurisdiction laws, which allow courts to prosecute crimes against humanity committed anywhere in the world.

"The verdict will not heal the wounds in the heart of a mother who lost her son under torture or ease suffering endured by a detainee but it's a chance to renew the hope the Syrian regime will fall," said Omar al Shughri, an activist for detainees with the Syrian Organisation for Emergencies.

Raed Al Saleh, head of the opposition-run Syrian civil defence service known as the White Helmets, said the trial would have had more impact if it could have been held in Syria.

"The trial was under international jurisdiction but what about the tens of thousands who disappeared in Assad's prisons and who were tortured every day," he added.

Ship that Ukraine alleges has stolen grain likely off Syria