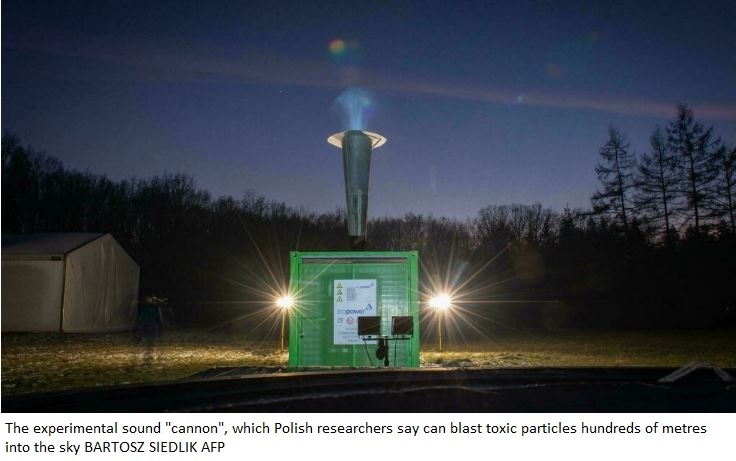 In a battle against Poland's constant smog, scientists are testing out a new "cannon" that uses soundwaves to push toxic particles higher into the atmosphere to allow residents to breathe.

Installed on top of a metal container, the experimental device consists of a large upside-down cone that makes a loud sound every six seconds.

The aim is to chase the smog from Kalwaria Zebrzydowska, which like many Polish towns and cities faces the problem every winter when residents fire up highly polluting heating systems.

When the sun goes down, a heavy smog descends on the town as chimneys belch out thick smoke.

Poland is one of the most polluted countries in Europe, breaching EU norms by hundreds of percentage points at the worst times of year.

By creating soundwaves, researchers say that the "cannon" helps reduce the concentration of harmful PM2.5 and PM10 particles in the town's air.

"We are using a vertical shockwave that is created by the combustion of acetylene and air," said Dominik Grybos from the Academy of Mining and Metallurgy in Krakow, one of the inventors.

"The wave projects the polluted air higher," he told AFP.

The toxic particles are sent up several hundred metres (yards) higher, making them harmless for residents.

"We have found that if we use the cannon for between half an hour and an hour, the pollution is reduced by 15-30 percent within a perimeter of two-three kilometres (1.2-1.9 miles) from the cannon," Grybos said, adding that the effects last for "between one and three hours".

Researchers are trying to work out the required frequency of the blasts, as well as the duration and the time needed for the entire procedure.

Grybos said he hopes the invention could find a commercial use, particularly in Poland.

Residents of Kalwaria Zebrzydowska are broadly in favour of the idea despite the sound.

"The smog is very heavy here. We can't air our flats because it stinks so much. So, if it can help, let them do the tests," said Jolanta Walkowicz, a 43-year-old accountant.

"We can barely hear the sound -- it's like fireworks going off," she added.