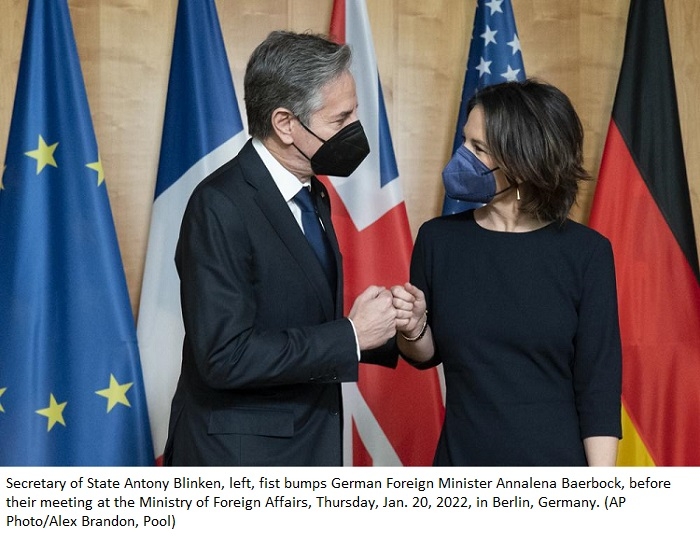 The United States, Germany and other Western allies are united on the conflict in Ukraine, US Secretary of State Antony Blinken said in Berlin on Thursday, following a meeting with his German counterpart Annalena Baerbock.

"That unity gives us strength, a strength I might add that Russia does not and cannot match," Blinken said alongside the German foreign minister.

The US official said it was up to Russia whether it chooses a path of escalation or diplomacy in the conflict.

Meanwhile, he accused Russia of seeking to divide Western allies and again warned of harsh consequences in the event of a Russian invasion of Ukraine.

Baerbock repeated that warning, threatening that further acts of aggression from Russia would be met with "grave consequences." She called on Moscow to immediately take steps to de-escalate the crisis.

The United States and its NATO partners are concerned by the deployment of around 100,000 Russian soldiers to the border with Ukraine. They fear that Russia could be planning to invade Ukraine.

Moscow has argued that these are its own troops on its own territory.

Referring to her US partner, Baerbock said, "We are agreed that the only path out of this crisis is a political path, and this path is one of dialogue."

"Unfortunately, Russia's behaviour is still speaking another language," she added, pointing to the deployment of Russian troops to Belarus and military exercises on the Ukrainian border.

For his part, Blinken denied that military assistance to Ukraine amounted to a provocation.

"The idea that the provision by the United States, by European countries, by NATO of defensive military equipment to Ukraine is somehow provocative or cause for Russia's actions has the world upside down," Blinken argued.

"All we're trying to do is to make sure to the best of our ability that ... Ukraine has the means to defend itself and that might perhaps deter further aggression by Russia."

Meanwhile, he described the Nord Stream 2 pipeline as "leverage" against Russia in the dispute.

"It's ... worth noting that gas is not flowing through Nord Stream 2 yet which means that the pipeline is leverage for Germany, the United States and our allies, not Russia," Blinken said.

This is undoubtedly something that Moscow is weighing as it considers its next move, he added, "particularly given the strong statements countries have made about the serious consequences Russia will face if it commits further aggression against Ukraine.

"So we are at a decisive juncture."

Blinken arrived in Europe on Wednesday amid efforts to address spiralling tensions with Russia over the Ukraine conflict.

On Friday, the top US diplomat is scheduled to travel onwards to Geneva, where he will meet Russian Foreign Minister Sergei Lavrov.

Prior to her meeting with Blinken on Thursday, Baerbock held talks with her counterparts from France and Britain.

PM Masrour Barzani receives Chairman of the Senate Committee on Foreign Affairs, Defense and the Armed Forces of the French Senate