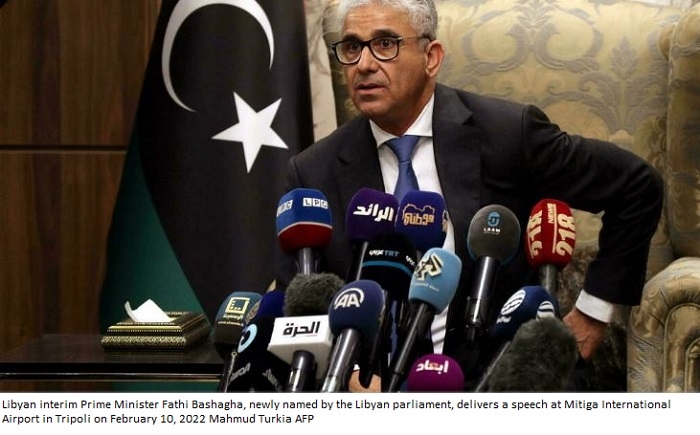 Libyans found themselves with two prime ministers on Friday, raising the spectre of renewed violence in a country where elites have ignored the wishes of citizens to choose their leaders, analysts say.

After weeks of manoeuvering since December 24 elections were indefinitely postponed, the House of Representatives in the country's east on Thursday picked former interior minister and ex-fighter pilot Fathi Bashagha to replace interim prime minister Abdulhamid Dbeibah.

But Dbeibah, a construction tycoon appointed a year ago as part of United Nations-led peace efforts, has vowed only to hand power to an elected government.

Peter Millett, a former British ambassador to the country, told AFP the main division now "is between the Libyan people -- who want elections -- and the political elite, who don't."

He noted that more than two million Libyans, out of a total population of seven million, had collected voter cards last year, showing a desire to pick new representatives in December when both legislative and presidential polls were supposed to be held.

"The motivation of many MPs is to hang on to jobs and privileges rather than allow for a smooth process leading to elections," Millett said.

It's not the first time the oil-rich North African country has found itself with two premiers.

Torn apart by a decade of strife since a 2011 NATO-backed uprising that toppled dictator Moamer Kadhafi, Libya had two rival heads of government between 2014 and 2016.

The UN has been working to reunite the country's divided institutions since the end of the last major fighting in 2020, but many analysts have accused the entrenched political elite of blocking reconciliation efforts.

The country's infrastructure is ruined and its economy battered, meaning that for normal Libyans, the stakes couldn't be higher.

"The cost of living is obscene," said Abdul Mawla al-Kaseh, a resident of Shahat in northeastern Libya.

Salem Bakkar, also from Shahat, said it doesn't matter who heads the government as long as they "stress the importance of reconciliation and urge the holding of elections."

Libya has seen months of relative stability since a landmark October 2020 ceasefire which formally ended eastern military chief Khalifa Haftar's bid to seize by force the capital Tripoli in the west.

But a patchwork of local militias, with foreign backing and linked to political figures, continue to vie for control.

Dbeibah and his unity government were appointed with a mandate to steer the country to the polls, which were eventually derailed by differences over their legal basis and contentious candidates.

That left question marks over the UN's roadmap.

The eastern-led parliament -- whose own mandate ended in 2015 -- argued that Dbeibah's administration was past its sell-by date, and stepped up efforts to remove him.

With Bashagha now challenging his power, backed by Haftar's forces, some analysts fear a return to conflict.

Yet that could look very different from the previous rounds of violence fuelled by the country's geographic divisions.

"There really isn't an East-West division as there was a year ago," said Amanda Kadlec, a former member of the UN panel of experts on Libya.

"What is potentially dangerous is violence in Tripoli, as Bashagha and Dbeibah both have deep connections across western Libya," she added.

Millett also warned of "potential instability in Tripoli" and said: "The international community should aim for a clear and transparent, process that sets out a clear roadmap to elections."

'A lot can happen'

But on the ground, the delicate balance of power could easily shift, Kadlec said.

"The militias will move with whomever they perceive as having power," she said.

Kadlec added that armed groups backing Dbeibah could easily shift behind Bashagha, providing he is "willing to give them positions in government, keep paying their salaries and giving them weapons".

Claudia Gazzini, senior Libya analyst with the International Crisis Group, wrote on Twitter that the parliament was set to hold a vote of confidence on Bashagha's proposed cabinet two weeks from now.

"As recent events in Libya showed us, a lot can happen in two weeks," she said.

Just hours before the parliamentary vote to replace him, gunmen in Tripoli fired on Dbeibah's convoy in Tripoli.

The interior ministry said nobody was hurt -- but there are fears it could be the opening volley of another ruinous battle.