US to evacuate Ukraine embassy as Russian invasion fears intensify 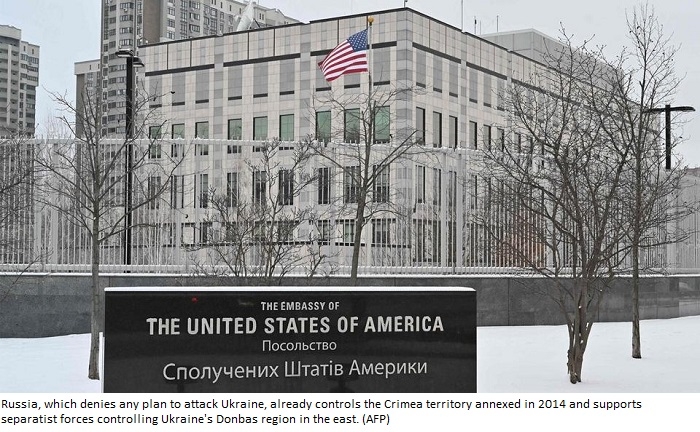 The United States is set to evacuate its embassy in Kyiv as Western intelligence officials warn that a Russian invasion of Ukraine is increasingly imminent. Follow our live updates below.

Russia says it has 'optimised' diplomatic staff numbers in Ukraine

Russia has decided to "optimise" its diplomatic staff numbers in Ukraine, fearing "provocations" by Kyiv or other party, a spokeswoman for the Russian foreign ministry said on Saturday.

Maria Zakharova did not say whether that meant a reduction in staff numbers but said the embassy and consulates in Ukraine continued to perform their key functions.

The Ukrainian government urged citizens on Saturday to stay calm and united, saying the armed forces are ready to repel any attack on the country.

"It is now critical to remain calm and united within the country, and avoid actions that undermine stability and sow panic," the Foreign Ministry said in a statement.

"Ukraine's Armed Forces are constantly monitoring developments and are ready to repel any encroachment on the territorial integrity and sovereignty of Ukraine," it added.

Belgium on Saturday advised its nationals to leave Ukraine after the US warned that a Russian invasion of its neighbour could begin within days with aerial bombardments.

Belgium joins the US and several European countries, who have called on their citizens in Ukraine to leave the country for fear war breaks out.

"Nationals who are currently in Ukraine and whose presence is not strictly necessary in the country are strongly advised to leave the country," the Belgian foreign ministry said on its website.

It said it strongly advised against travel to the country, adding that an evacuation could not be guaranteed.

The ministry said that in case of a "sudden deterioration, communication links including internet and telephone lines could be seriously affected" and air links hampered.

UK tells nationals in Ukraine not to expect military evacuation

British nationals who choose to stay in Ukraine should not expect a military evacuation if conflict with Russia breaks out, junior defence minister James Heappey told Sky News on Saturday.

"British nationals should leave Ukraine immediately by any means possible and they should not expect, as they saw in the summer with Afghanistan, that there would be any possibility of a military evacuation," he said.

On Friday the UK government advised British nationals to leave Ukraine now while commercial means were still available and advised against all further travel to the country.

Heappey said no decision had yet been made on Britain's diplomatic presence in Ukraine.

More than 30 ships from the Russian Black Sea fleet have started training exercises near the Crimea peninsula as part of wider navy drills, the country's RIA news agency reported on Saturday.

RIA said that more than 30 Russian ships have left the ports of Sevastopol and Novorossiisk "in accordance to the plans of the drills" near Crimea, which Russia annexed from Ukraine in 2014.

RIA said the aim of the drills was the defence of the coast of Crimea, the outposts of the Black Sea fleet as well as the economy sector and naval communications.

Russia announced last month its navy would stage a sweeping set of exercises involving all its fleets this month and next, from the Pacific to the Atlantic, the latest show of strength in a surge of military activity during the standoff with the West.

Putin to speak to Biden and Macron

Russian President Vladimir Putin is set to speak with his US and French counterparts on Saturday after the United States warned that Moscow could invade Ukraine in days.

The United States had dramatically raised the alarm over Ukraine on Friday, saying a Russian invasion starting with civilians caught under aerial bombing could begin in days and telling US citizens to leave within 48 hours.

In a diplomatic flurry to head off a possible invasion, Putin will speak with Joe Biden and Emmanuel Macron on Saturday.

US Secretary of State Antony Blinken said he will also speak to Russian counterpart Sergei Lavrov the same day, terming this "a pivotal moment" in the crisis and that his government was "prepared for whatever should happen."

"We continue to see very troubling signs of Russian escalation, including new forces arriving around Ukraine's borders," Blinken said at a press conference in Fiji.

"If Russia is genuinely interested in resolving this crisis of its own making through diplomacy and dialogue, we're prepared to do that," he said.

US to evacuate Ukraine embassy

US officials said the State Department plans to announce early Saturday that virtually all American staff at the Kyiv embassy will be required to leave ahead of a feared Russian invasion.

A small number of officials may remain in Kyiv but the vast majority of the almost 200 Americans at the embassy will be sent out or relocated to Ukraine’s far west, near the Polish border, so the US can retain a diplomatic presence in the country.

The department had earlier ordered families of US embassy staffers in Kyiv to leave. But it had left it to the discretion of nonessential personnel if they wanted to depart. The new move comes as Washington has ratcheted up its warnings about a possible Russian invasion of Ukraine.

The officials, who spoke on condition of anonymity because they were not authorised to discuss the matter publicly, said a small number of US diplomats may be relocated to Ukraine’s far west, near the border with Poland, a NATO ally, so the US could retain a diplomatic presence in the country.