US, UK sceptical of Russian claims of troop withdrawal from Ukraine 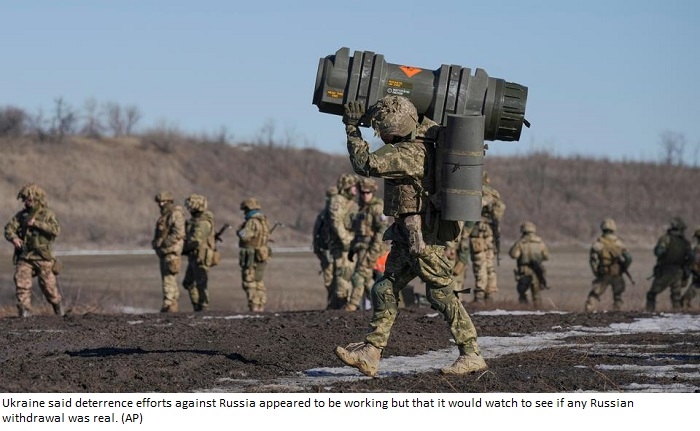 Russia on Wednesday said military drills in Moscow-annexed Crimea had ended and that soldiers were returning to their garrisons, a day after it announced a first troop pullback from Ukraine's borders. As US reports suggested Russian forces could attack as early as February 16, Ukrainian President Volodymyr Zelensky urged citizens to celebrate a "Day of Unity" on Wednesday.

NATO chief Jens Stoltenberg on Wednesday said Russia seemed to be building up its forces around Ukraine, despite Moscow having announced a troop pullback earlier in the day.

"We have heard the signs from Moscow about readiness to continue diplomatic efforts, but so far, we have not seen any de-escalation on the ground. On the contrary, it appears that Russia continues their military build-up," Jens Stoltenberg said Wednesday ahead of a meeting of NATO defence ministers.

10:10 am Paris time: EU’s von der Leyen says gas supply on 'safe side' for winter
EU commission chief Ursula von der Leyen on Wednesday said that Europe could survive Russia's squeeze on gas supplies to the EU thanks to an unprecedented diversification of sources in recent weeks. "Our models show, with all the measures we have taken, that we are now on the safe side for this winter," Von der Leyen said at a European Parliament session in the eastern French city of Strasbourg.

10:00 am Paris time: Belarus says 'not a single Russian soldier' will stay after joint drills

Belarus's foreign minister Vladimir Makei said Wednesday that no Russian soldiers would remain in the country after the massive joint manoeuvres by Minsk and Moscow on the Ukrainian border. "Not a single (Russian) soldier or a single unit of military equipment will stay on the territory of Belarus after the drills with Russia," Makei told a press conference in Minsk.

The head of the European Council, Charles Michel, on Wednesday urged Russia to take "concrete" steps to ease tensions around Ukraine. "Russia has signalled that it may be open to diplomacy and we urge Russia to take concrete and tangible steps towards de-escalation because this is the condition for sincere political dialogue," Michel told lawmakers. "The choice today is a choice between war and tragic sacrifices that would go along with that war or the courage of a political engagement, the courage of a diplomatic negotiation", he added.

9:40 am Paris time: US, UK sceptical of Russian overtures

President Joe Biden said American officials had not verified Russia’s claim of a troop pullback. He promised that the US would give diplomacy "every chance," but he struck a sceptical tone about Moscow's intentions. "Two paths are still open," Biden said in remarks at the White House. "But let there be no doubt: If Russia commits this breach by invading Ukraine, responsible nations around the world will not hesitate to respond. If we do not stand for freedom where it is at risk today, we’ll surely pay a steeper price tomorrow.”

Russia on Wednesday said military drills in Moscow-annexed Crimea had ended and that soldiers were returning to their garrisons, a day after it announced a first troop pullback from Ukraine's borders.

"Units of the Southern Military District, having completed their participation in tactical exercises, are moving to their permanent deployment points," Moscow's defence ministry said in a statement, as state television showed images of military units crossing a bridge linking the Russian-controlled peninsula to the mainland.

7:40 am Paris time: Ukrainian defence minister doesn't see 'anything unexpected'
Ukraine's Defence Minister Oleksii Reznikov said on Wednesday the latest threat assessments did not contain "anything unexpected" and were consistent with earlier views. In a televised statement he said Ukrainian armed forces were keeping up a nationwide military drill, one of which would be attended by the military attaché of Belarus.

Ukraine's neighbour has assured Kyiv there is no military threat from its territory.

Reznikov said he would participate in a "virtual meeting" of all NATO defense ministers set for Thursday.

Ukraine’s President Volodymyr Zelensky urged citizens to celebrate a "Day of Unity" on Wednesday, February 16, a date he chose for what he hopes will be a patriotic outpouring after US reports suggested Russian forces could attack as early as today.

An intense diplomatic campaign is underway to head off the crisis triggered when Russia deployed more than 100,000 troops on Ukraine's borders, backed with fleet reinforcements and powerful artillery and missile systems.

But Zelensky reacted with sarcasm to the US warning, and declared Wednesday a "Day of Unity". "Serious external and internal challenges have arisen, which require responsibility, confidence and concrete actions from me and each of us," he said. "But our state today is stronger than ever," he said.