Russian tanks at Belarus-Ukraine border stir up anger ... at US 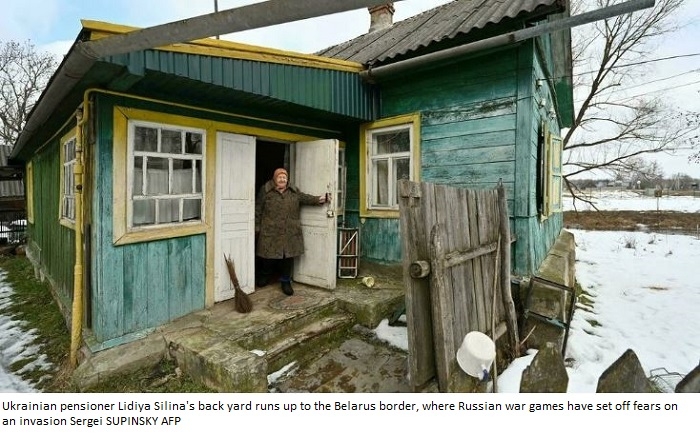 Ukrainian pensioner Lidiya Silina would take her trash out on the Belarusian side of the border opposite the twisty stream. That was until trouble started and the Russian tanks came.

But the 87-year-old has a clear idea about who is to blame for the most dangerous standoff between the Kremlin and the West since the Cold War.

"The Ukrainians could start something, thanks to the Americans and the British, who brought all their weapons here," she says in the green wooden shack she calls home.

"For them, Ukraine is just a field of battle with Russia."

Silina's snow-covered vegetable garden starts on the northern edge of Ukraine and ends at what has become one the world's most militarised frontiers, and the western edge of Russia sits just 20 kilometres (12 miles) east of her picket fence.

The Kremlin says it is pulling back some of its forces and winding down weeks of war games –- a crucial part of which was staged just across the 420-kilometre border between Ukraine and Belarus.

But Silina is not too bothered that Russian President Vladimir Putin and Belarusian strongman Alexander Lukashenko have decided to rattle their sabres by her backyard.

She says both men have their good sides.

"Lukashenko is a dictator, but look at how well they live in Belarus. Many don't like Putin, but at least they have some semblance of order in Russia," she said.

"The Ukrainians, Belarusians and the Russian people –- they don't want war. Only our government does," she said of Kyiv's Western-backed administration.

Washington does not accept Russia's claims it has started to withdraw the troops its has amassed around Ukraine, including 30,000 which took part in the exercise in Belarus.

US officials say Russia is deploying more forces while moving others around over small distances to support its claims that a planned drawdown has begun.

Some NATO allies have supplied weapons to the Ukrainian government, but say they are to deter Russian aggression against its smaller neighbour.

The shortest path to Kyiv not involving a run through the radioactive fields of Chernobyl's stricken power plant would take the Russians down a nicely paved highway starting on the edge of Silina's rusted gate.

But the locals have been hearing about the Russian danger ever since it kicked off a first wave of exercises in March 2021.

Some seem more exhausted than frightened by all the war talk.

"A year ago we had the same situation. It got very heated," said truck driver Ruslan Muratov.

"I don't know, perhaps we've just gotten used to it, that there are constantly these escalations." he shrugged.

"Of course you still want this all to end as soon as possible."

That forced Silina to find a new place to toss her garbage.

It also severed links between friends and families whose ties stretch back to the days when the three countries were part of the Soviet Union and opposed to the West.

These familial links still lead some Ukrainians living in the frontier region trust to the Russian and Belarusian leaders more than those in the West.

"We watch the news and they tell us that Russia is attacking Ukraine. It's all a lie! It's a provocation. There will be no war and I don't want to believe there will be one," said retiree Nadezhda Bronfilova.

"They are just spreading lies, that Putin will attack Ukraine. It could never happen in this lifetime. Why would he attack us? Honestly, if you think about it, why?" she demanded.

Her friend Lidiya Titova paused for thought while reclining on her beat-up bicycle and agreed.

"We need to live like three sisters -- Ukraine, Belarus and Russia," she said.