US, Egypt launch group to prepare for COP27 climate summit 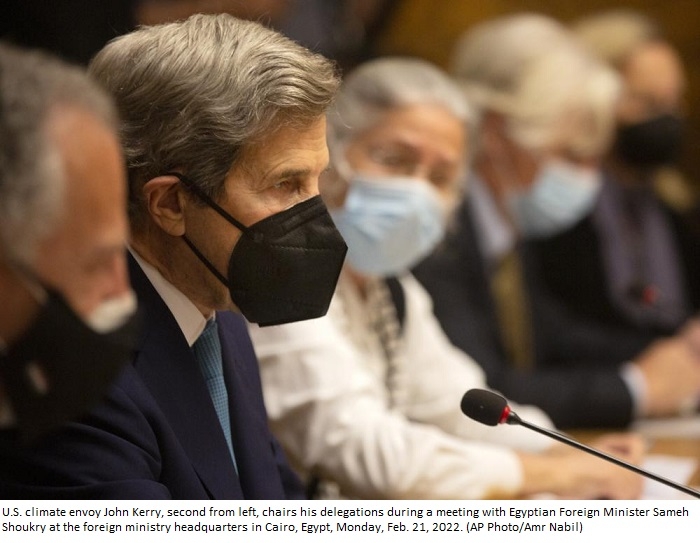 The United States and Egypt on Monday launched a joint working group to prepare for the next climate change summit in November, the American envoy for climate issues said.

Special Presidential Envoy for Climate John Kerry said the group is focused on the United Nations’ COP27 conference in Egypt’s Red Sea resort of Sharm el-Sheikh. He said the country has already begun its preparations for the meeting.

Kerry said other world tensions, including the ongoing Ukraine crisis, “will not change the reality of what is happening every day with respect to our climate,” and called the issue an “international threat for all of us.”

“There are no politics in this. There is no ideology in this. This is not anything to do with some of the issues” of concern for the U.S. administration, Kerry said at a news briefing in Cairo with Egyptian Foreign Minister Sameh Shukry. Neither official took questions from reporters.

Kerry, who also met with Egyptian President Abdel Fattah el-Sissi, was referring to conflicts in the Middle East and likely Egypt’s human rights record, which has drawn criticism from the U.S. and other western governments.

Shukry said they discussed priorities and goals of the Egyptian-chaired COP27, including making funds available to developing counties to implement the Paris 2015 agreement on climate change.

The former U.S. senator and secretary of state, who landed in the Egyptian capital on Sunday, is expected to speak at the American University in Cairo on the future of international climate action in the leadup to COP27, the State Department said.

Kerry said that the U.S. was also working with Egypt on its own transition to a clean energy future.

In June, Kerry announced an increase in U.S. funding to help Egypt convert to solar energy and move away from fossil fuels, a major source of energy in the country of over 100 million people.

In recent years, the government of President Abdel Fattah el-Sissi has taken steps to convert to renewables, seizing the advantage of the country’s optimal solar and wind conditions for energy harvesting.

But the government has faced criticism from environmental activists for razing green spaces and cutting down tens of thousands of trees for infrastructure projects, especially in Cairo where a gigantic cloud of air pollution often hovers.