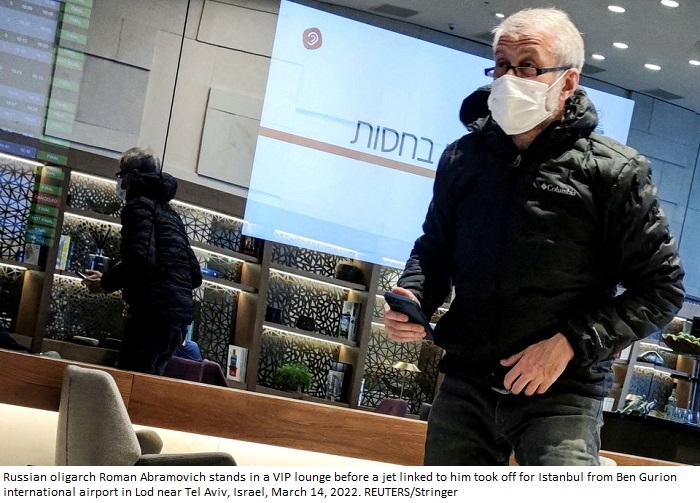 The U.S. Commerce Department on Friday moved to effectively ground 100 airplanes that have recently flown to Russia and are believed to violate U.S. export controls, including a plane used by Russian businessman Roman Abramovich.

The Commerce Department warned companies and other entities around the world that any refueling, maintenance, repair, or spare parts or services violate U.S. export controls and subject companies to U.S. enforcement actions that could include "substantial jail time, fines, loss of export privileges, or other restrictions," the department said.

The department said in a statement the action means "international flights from Russia on these aircraft are effectively grounded." Officials told Reuters said it could also prevent domestic Russia flights because of U.S. enforcement actions that could target companies servicing planes in Russia.

U.S. Commerce Secretary Gina Raimando said in a statement the department is "publishing this list to put the world on notice—we will not allow Russian and Belarusian companies and oligarchs to travel with impunity in violation of our laws."

Aeroflot and a spokesperson for Abramovich, who owns the English soccer club Chelsea did not immediately respond to requests for comment.

Volga-Dnepr declined to immediately comment but said Friday it has suspended all flights using Boeing aircraft citing sanctions and a decision by Bermuda's Civil Aviation Authority to terminate their safety certificates.

The United States, Canada and much of Europe have barred Russian planes from flying over their airspace, which has forced the cancellation of much of Russia's international flights.

The rules apply to any U.S. manufactured aircraft or any with more than 25% U.S.-origin controlled content that were re-exported to Russia after the new stringent controls on aviation-related items for Russia took effect on Feb. 24.

Deputy Commerce Secretary Don Graves said in a statement the series of U.S. actions "have isolated Russia and Belarus from the global economy, and I hope that today’s action brings that fact home to the Russian businesses and oligarchs that seek to continue their operations."

Moscow took a first step this week towards keeping its commercial fleet flying by allowing its airlines to re-register leased planes in Russia, giving local authorities direct control over the certificates of airworthiness needed for each jet.

Western analysts say airlines may start stripping some of Russia's 500 foreign-leased jets within weeks or even days for parts while shopping around for genuine, but resold, parts from countries such as China.

Boeing said earlier this month it was suspending parts, maintenance and technical support for Russian airlines.

The Commerce Department's Bureau of Industry and Security said since March 2, based on publicly available information, it "identified a number of commercial and private flights from third countries to Russia" and could add more planes as it continues its review.

Assistant Secretary of Commerce for Export Enforcement Matthew S. Axelrod said the "action lets Vladimir Putin’s enablers know that, as a consequence of their actions, they have fewer places to hide and fewer ways to get there."