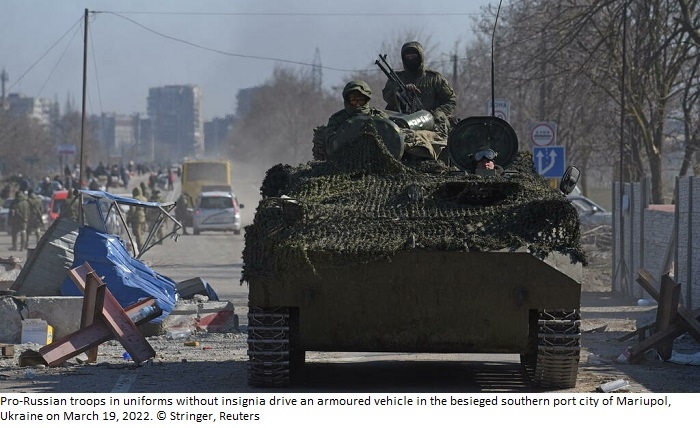 Ukrainian President Volodymyr Zelensky said Russia's siege of the port city of Mariupol was "a terror that will be remembered for centuries to come" as city council officials said early on Sunday that thousands of residents there had been taken by force across the border onto Russian territory.

The Russian defence ministry said on Sunday it had once again fired its Kinzhal hypersonic missiles in Ukraine, "destroying a large storage site for fuels and lubricants" in the Mykolaiv region. Russian Kinzhals on Saturday targeted "a large underground warehouse containing missiles and aviation ammunition" in the village of Deliatyn in the Ivano-Frankivsk region.

Russian forces backed by Chechen fighters broke through the defences of the besieged city of Mariupol and are now inside the city, which has been under Russian shelling for days.

Air raid alerts went off in almost every region of Ukraine late Saturday and early Sunday, according to the Kyiv Independent. Multiple air raids on Mykolaiv took place in quick succession on Saturday, a regional official said, a day after a deadly strike on a military barracks in the southern Ukrainian city.
Mariupol's rescue workers were still searching for survivors after a theatre was flattened by Russian air strikes on Wednesday. Moscow denies hitting the building or targeting civilians.

Zelensky said in an address to the nation early on Sunday that the country wants peace and that ongoing talks with Russia are “not simple or pleasant, but they are necessary”. He has requested a direct meeting with Russian President Vladimir Putin.

The UNHCR has said that more than 3.25 million Ukrainians have fled across the border since the war began on February 24, with more than 2 million crossing the Polish border. The UN children’s agency said around half of those who have fled are children.