The President meets with Belgium Ambassador to Iraq 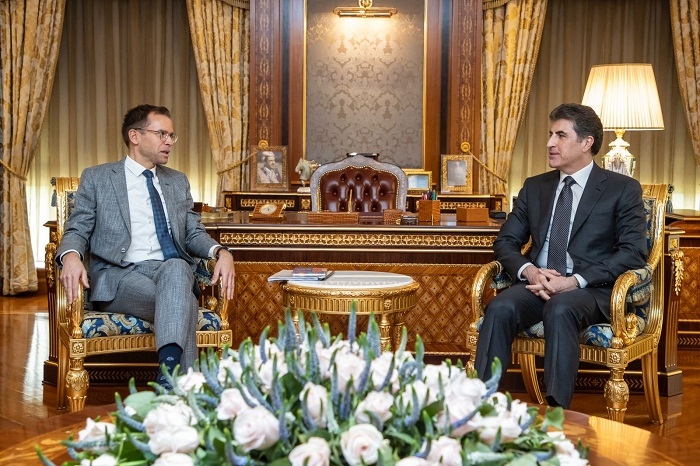 The meeting focused on the relations of Iraq and the Kurdistan Region with Belgium, Belgium’s role and contributions within the International Coalition against ISIS, the latest political developments in Iraq, and Erbil-Baghdad talks.

Both sides affirmed the need to develop ties and expand areas of mutual cooperation, underlining that ISIS continues to constitute a real threat to security in Iraq and the wider region, and reiterating that Iraq continues to need the support of the international community.

For his part, President Nechirvan Barzani expressed the Kurdistan Region’s gratitude to Belgium for their support in the war against ISIS, reiterating the need for cooperation and coordination between the Iraqi army and the Peshmarga, especially in areas with continued security vacuum.

The situation in Shingal district and the status of the refugees fleeing the area due to security concerns, the mission of the UNITAD in Iraq, the situation in Kurdistan Region and the importance of dialogue and common understanding among parties were also highlighted. Discussions also covered the issues of civil liberties and freedom of expression, the COVID-19 pandemic and its ramifications, the latest on the war in Ukraine, and the developments in the wider region and the world were also highlighted.