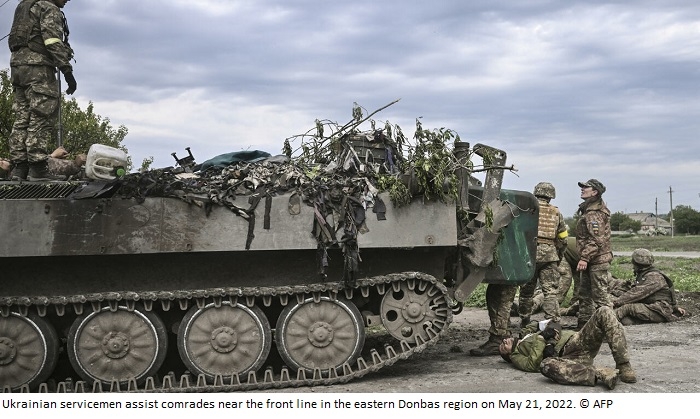 The war in Ukraine looms large as the World Health Organization opens its annual assembly on Sunday, threatening to overshadow other health crises and a reform push aimed at preventing future pandemics. "The situation in Donbas is extremely difficult," Ukrainian President Volodymyr Zelensky said in his nightly address.

After ending weeks of resistance by the last Ukrainian fighters in the strategic southeastern city of Mariupol, Russia is waging what appears to be a major offensive in Luhansk, one of two provinces in Donbas.

Russian-backed separatists already controlled swathes of territory in Luhansk and the neighbouring Donetsk province before the February 24 invasion, but Moscow wants to seize the last remaining Ukrainian-held territory in Donbas.

The Ukraine war looms large as the World Health Organization opens its main annual assembly Sunday, threatening to overshadow efforts on other health crises and a reform push aimed at preventing future pandemics.

The UN health agency will kick off its 75th World Health Assembly Sunday afternoon, convening its 194 member states for their first largely in-person gathering since Covid-19 surfaced in late 2019.

The agenda will remain focused on the continuing coronavirus crisis and efforts to avert future pandemics.

But the war raging in Ukraine and rebukes of Russia for its invasion are expected to take centre stage.

Kyiv and its allies will present a resolution during the assembly harshly condemning Russia's invasion, and especially its more than 200 attacks on healthcare, including hospitals and ambulances, in Ukraine.

It is also to voice alarm at the "health emergency in Ukraine", and highlight the dire impacts beyond its borders, including how disrupted grain exports are deepening a global food security crisis.