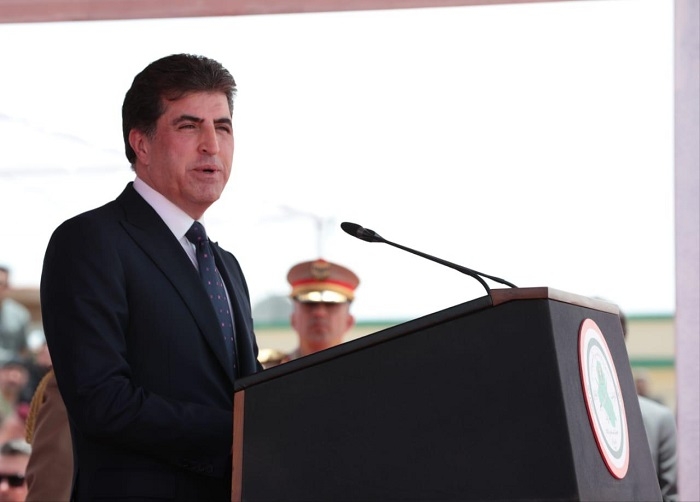 Kurdistan Region President Nechirvan Barzani participated in the graduation ceremony of two courses of Qallachoalan’s 3d Military Academy. At the ceremony, attended by a number of high-ranking government and party officials, the President delivered the following speech:

Distinguished guests,
Our brave Peshmergas,
Ladies and gentlemen, commanders, teachers, and military trainers,
Dear families and relatives of the graduates,
I also like to welcome my dear friend, Mr. Bafel, the President of the Patriotic Union of Kurdistan (PUK).

Good day and welcome all. I am very happy today at the graduation ceremony of the most beloved people of Kurdistan, our brave Peshmergas.

First of all, I would like to thank all the teachers and military instructors of both the 16th Basic Course and the 6th Training Course of officers. You spent two years and three months with the basic course, and nine months with the officer-training course. And your work is worthy of great appreciation.

I would like to thank the deans and staff of the 3rd Military College in Qalachwalan, who have worked hard during this period to provide all the necessities for the success of these two courses.

The role of the 3rd Military College in the training of the Peshmergas and the Iraqi military forces is a prominent and commendable role. Here, I must say: Qalachwalan Military College is an important memory and gift from the late President Mam Jalal. May he rest in peace and God bless his soul.

I congratulate each and every one of the 503 officers who participated across all provinces and regions of the Kurdistan Region and the Disputed Areas. A warm congratulation to the women who participated in these courses and took the oath to make all their efforts to defend this land and its achievements together with their male colleagues. I congratulate them and hope many more will follow suit. I am sure that you have all learned much theoretically and practically and can now put new vigor and force into the Peshmerga forces.

To the people of Kurdistan and Iraq,

I congratulate you for witnessing the graduation of this band of Peshmerga forces here today, because they will be a major help to protect Iraq’s sovereignty. Protecting Iraq’s sovereignty is in the interest of every citizen and region of Iraq.

Federalism is at its core a system to facilitate the management of the country’s internal affairs and equality among all structures and areas of Iraq. Federalism does not weaken Iraq’s sovereignty, but it will strengthen our partnership in Iraq. The Iraqi constitution was written at the time with this understanding and vision in mind, and therefore we always demand that we treat each other according to the letter and spirit of the constitution, which will help us all to equally benefit from the political process.

When Iraq’s borders, authorities and decisions are protected from external interferences, it is in Iraq’s best interest. When the whole regions, provinces and areas of Iraq are protected, it will be in the interest of all of Iraq. This is our vision in the Kurdistan Region, and the Peshmerga are educated with this sentiment and belief.

That’s why we proudly say that when the regime was overthrown in 2003, a number of important locations in Baghdad including the Iraqi parliament remained safe and secure, since their protection was assigned to the Kurdistan Peshmerga forces; and it is well known that the Peshmarga conducted their duties professionally and up to the present time, the Peshmarga remains in charge of some of these locations.

Also during the ISIS war, the Peshmerga were a strong ally of the army and all Iraqi armed forces in protecting Kirkuk and Diyala provinces, in securing Bashir, Mosul, and many other places in Iraq. Therefore, I call on every Iraqi to oppose attacks by law-breaking groups inside Iraq on the Kurdistan Region and the capital Erbil.

These groups are paving the way for continued turmoil in Iraq. They want the violation of Iraq’s sovereignty to continue. The peace of all the cities and places of the Kurdistan Region and Iraq in general are interrelated. The peace in Erbil and Najaf, Sulaimani and Basra, Dohuk and Anbar is interconnected. We share collective and common sovereignty in Iraq, as we share our common interests, successes and failures.

It is also necessary to speed up the start of the two joint brigades, which have been decided, to prevent ISIS from reinforcement in the disputed territories. Unfortunately, residents of villages and towns bordering the areas of the Article 140 of the Constitution, along with the Peshmerga, the army and the Popular Mobilization Forces are frequently attacked by ISIS terrorists.

Due to the increase in ISIS attacks in these areas, normalizing the situation in Shangal, Kirkuk, Makhmur, Khanaqin, Gulala and other areas is more necessary now than ever for the stability of Iraq and Kurdistan. We must all help prevent ISIS from becoming more powerful. And we should not allow our partnership across all Iraqi communities, which emerged during the war against ISIS, to be lost.

The recent joint operations between the Peshmerga and the Iraqi army against ISIS have been successful, but that is not enough and requires ongoing joint action. The inauguration of the joint brigades of the Peshmerga and army will be a good step in this regard.

My fellow citizens of Kurdistan,

So far, the 1st and 2nd Support Forces, as well as 22 brigades of the 70th and 80th Forces, have been placed under the Peshmerga Ministry. This is an important step thanks to the Kurdistan Democratic Party, the Patriotic Union of Kurdistan and the allies. But reorganizing and unifying the Peshmerga requires faster and more reliable action.

The Peshmerga showed so much heroism during the ISIS war that it was a source of appreciation for the nations and the major leaders across the world. It is also a source of pride for the people of Kurdistan. To protect the Peshmerga’s standing and pride, its hard-won respect and regard, it must be reunited.

It is true that according to the law, the Kurdistan Region Presidency is responsible for the general command of the Kurdistan Peshmerga forces, but in order to implement the reform and unification of the Peshmerga, the PUK and KDP must decide, with confidence and without regret, to eliminate political parties’ influence on the Peshmerga institutions. Political party interference in Peshmerga affairs must end. In this way, the real reform and unification of the Peshmerga will begin and succeed, otherwise, with all the major political conflicts, even what has been achieved will vanish.

The lack of a unified Peshmerga force and security agency has led to a situation where all political disputes in the Kurdistan Region directly affect the security of citizens, their markets, businesses and livelihoods, and their state of mind. People expecting the worst when political conflicts emerge; many even fear the partition of the Kurdistan Region and some fear an all-out war. Although even during the most difficult periods of political disputes in Kurdistan, I am always confident that war and partition will not occur.
But the concerns, worries and sensitivities of the people of Kurdistan must be taken seriously. They should encourage us to fulfill the promises that our parties have made to the people of Kurdistan.
Each and everyone of us have taken the oath before the people of Kurdistan and the souls of our martyrs, as we promised to make the Peshmerga a national force far from the party interference and to prevent the partition of our land, people, and the interests of our people.

Why should we speed up a trustworthy reorganization and unification of the Peshmerga?

Our large-scale war against ISIS brought the finest military advisers across the world to cooperate with the Iraqi army and the Peshmerga forces. This cooperation is still ongoing and is respected and appreciated by the people of Kurdistan, the government and the Kurdistan Region Presidency. The allies have launched an extensive project to offer advice and assistance to reorganize and unify the Peshmerga.

This is an opportunity that the political parties should not deprive the Peshmerga and the Kurdish people of. The allies are cooperating with the Peshmerga, but they do not interfere in the disputes between the KDP and PUK within the Peshmerga forces.

I also call on the Iraqi federal government to seriously support this process, as it is an Iraqi national achievement and the Peshmerga are part of Iraq’s defense system. During the ISIS war, the Peshmerga proved with their blood that they are the defenders of all Iraqis and supporters of the Iraqi army.

As part of our legal duties at the Kurdistan Region Presidency, we have made attempts to help resolve the existing political disputes and their impact on Kurdistan Region. We are and have been in constant dialogue with all sides. I am happy to say that now an opportunity has come around for dialogue and negotiation, as the media war between the parties has also subsided.

In fact, our differences are resolvable, but what hinders us to come together and engage in dialogue is our own state of mind. This situation often emerges between the KDP and the PUK, which is a source of anxiety for all the people of Kurdistan. We have done so in the past, and now we have to make it clear that the government, the parliament, the judiciary and the Kurdistan Region Presidency should not be the grounds to settle political party disputes.

I often hear Peshmerga officers and high ranking officials, point to the problems and even come up with solutions in a patriotic and responsible way. I believe that the Peshmerga can always be loved by the Kurdish people and by the world, if they are well organized and united, and fully take distance from interfering in internal political disputes. The duty of the Peshmarga forces is the protection of the achievements of the Kurdistan Region, which has been realized through the sacrifices of hundreds and thousands of martyrs. The Peshamrga must remain faithful to their oath and take distance from political disputes in the Kurdistan Region and among political parties.

One reason I am now very happy to see the graduation of these two Peshmarga groups, is that I am aware that they were trained in accordance to patriotic spirit and advanced military sciences. I congratulate all of you again, and wish you all a good day. Long live Kurdistan, long live Kurds and God bless the country. Wish you all success.

Thank you very much