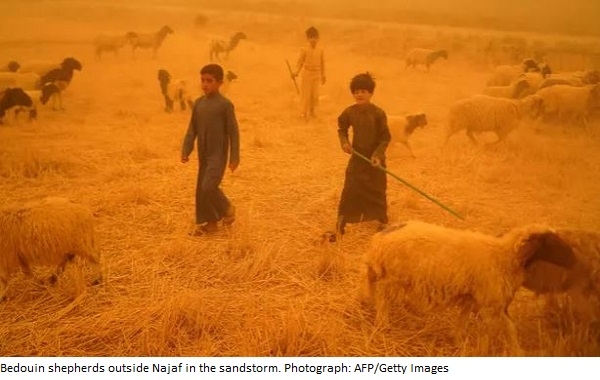 More than 1,000 people were hospitalised with respiratory problems, the health ministry said. Flights were also grounded in neighbouring Kuwait for a second time this month. The second heavy sandstorm in less than a week also descended on Saudi Arabia’s capital, Riyadh.

The Iraqi capital, Baghdad, was enveloped in dust cloud with usually traffic-choked streets largely deserted and bathed in orange light. South of the capital, near the Shia shrine city of Najaf, shepherds also found themselves shrouded in dust.

The Iraqi prime minister, Mustafa al-Kadhemi, ordered all work to cease in state-run institutions except for health and security services, citing “poor climatic conditions and the arrival of violent sandstorms”.

Air traffic was suspended at the international airports in Baghdad, Arbil and Najaf, before flights resumed in the capital and Arbil.

Later on Monday evening, Arbil’s airport closed again “due to thick dust”, according to the state news agency INA.

Iraq is ranked as one of the world’s five most vulnerable nations to climate change and desertification.

The environment ministry has warned that over the next two decades Iraq could endure an average of 272 days of sandstorms a year, rising to above 300 by 2050.

The Guardian with Agence France-Presse