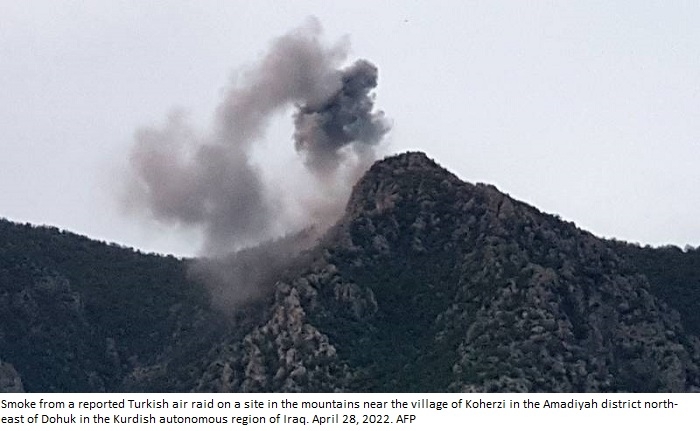 The PKK, which has been waging an insurgency against the Turkish state since 1984, a conflict that has killed about 40,000 people, many of them civilians, denied responsibility.

It has training camps and bases in autonomous Iraqi Kurdistan.

Relatives said that two children aged between 10 and 13 were killed in the attack.

They spoke to AFP at a mosque in the town of Dohuk, where the bodies were taken for funeral preparations.

Kurdish counter-terrorism forces accused the PKK of "firing two rockets on the village of Ardana in Bamarni sector". They put the toll at two dead and two injured.

The PKK said in response "we categorically deny" the allegation that the group's forces were responsible for firing the projectiles.

Ankara has launched a series of operations against PKK fighters in Iraq and Syria, the latest one in northern Iraq beginning in April.

The orchards hit by the projectiles are close to a Turkish military base.

Ankara and its western allies consider the PKK a terrorist organisation.

Ankara's defence ministry said on Thursday that a Turkish soldier was killed in an operation against the PKK, taking Turkish military fatalities in northern Iraq since Tuesday to six.

Last week, at least six people, including three civilians, were killed in northern Iraq by drone strikes that local officials said were carried out by Turkey.