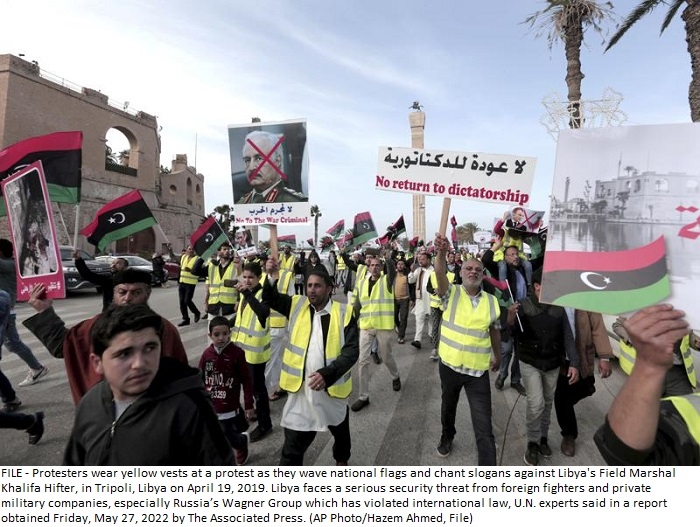 In particular, “migrants have been extremely vulnerable to human rights abuses and regularly subjected to acts of slavery, rape and torture,” the panel said in the report to the U.N. Security Council obtained late Friday by the AP.

The oil-rich North African nation plunged into turmoil after a NATO-backed uprising in 2011 toppled dictator Moammar Gadhafi, who was later killed. It then became divided between rival governments — one in the east, backed by military commander Khalifa Hifter, and a U.N.-supported administration in the capital of Tripoli. Each side is supported by different militias and foreign powers.

In April 2019, Hifter and his forces, backed by Egypt and the United Arab Emirates, launched an offensive to try and capture Tripoli. His campaign collapsed after Turkey stepped up its military support for the U.N.-supported government with hundreds of troops and thousands of Syrian mercenaries.

An October 2020 cease-fire deal led to an agreement on a transitional government in early February 2021 and elections were scheduled for last Dec. 24 aimed at unifying the country. But they were canceled and the country now has rival governments with two Libyans claiming to be prime minister.

The cease-fire agreement called for the speedy withdrawal of all foreign fighters and mercenaries but the panel said “there has been little verifiable evidence of any large-scale withdrawals taking place to date.”

The report said Chadian opposition groups operate from Libya and Sudanese fighters have been recruited by Hifter. Turkish-backed Syrian fighters have been seen by the panel in government military camps in Tripoli while Hifter-affiliated Syrian fighters operate alongside the Wagner Group’s fighters in the strategic northern city of Sirte and nearby Jufra. At least 300 of these Syrians have returned home and not been replaced by Hifter, the report said.

The panel said it continues to investigate the deployment of Wagner fighters and the transfers of arms and related materiel to support its operations.

The Wagner Group passes itself off as a private military contractor and the Kremlin denies any connection to it. But the United States identifies Wagner’s financer as Yevgeny Prigozhin, an oligarch who is close to Russian President Vladimir Putin.

The panel said it considers a Samsung electronic tablet left on a Libyan battlefield by a Wagner mercenary and obtained by the BBC in early 2021 to be authentic. It contained maps of the locations of 35 unmarked anti-personnel mines in the Ain Zara area of south Tripoli that was then a frontline area under Hifter’s control, supported by Wagner.

Several mines had never been reported as being in Libya before and their transfer therefore violated the U.N. arms embargo, the panel said. It added that a booby-trapped mine exploded during a mine clearance operation killing two civilian mine clearers.

Experts also received information about the recovery of anti-tank mines from positions primarily occupied by Wagner in south Tripoli.

The panel said the failure to visibly mark the anti-personnel and anti-tank mines and issue warnings of their locations to civilians in the areas was a violation of international humanitarian law by Wagner.

The Wagner tablet also contained a list of requested items including drones and tanks that would violate the arms embargo if delivered, the panel said, but it didn’t know if any of it had.

The panel said it identified 18 arms transfers and four examples of military training between March 2021 and late April 2022 that violated the U.N. arms embargo. Among the examples it cited was the Luccello, a ship flying the Comoros flag that delivered 100 armored vehicles to Hifter in Benghazi.

The experts said four migrants suffered human rights abuses in secret detention facilities controlled by human traffickers in the areas of Tazirbu in the Libyan desert and Bani Walid near the northwest coast. They said victims were enslaved, severely beaten, deliberately starved and denied medical care.

“Two former female detainees, who were 14- and 15-year-old girls at the time, further testified to the panel that multiple perpetrators repeatedly raped them, subjected them to sexual slavery and other forms of sexual violence during the period of over 18 months in a secret detention facility in Bani Walid,” the report said.

The panel said it also found that guards responsible for protecting the most vulnerable migrants in the government-run Shara al-Zawiya detention center “took a direct part in or turned a blind eye to consistent acts of rape, sexual exploitation and threats of rape against women and girls” detained there between January and June 2021.