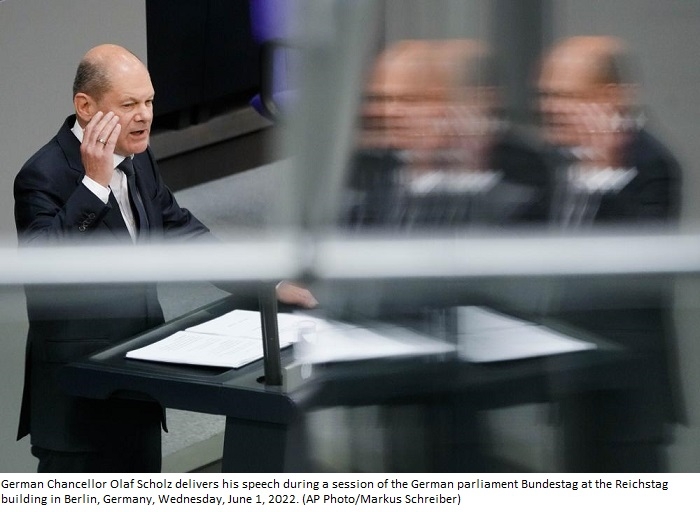 Western nations promised more and more advanced arms to Ukraine, in an effort to tip the balance in Kyiv’s favor as it fends off a grinding Russian advance in the east.

Germany said Wednesday it will supply Ukraine with modern anti-aircraft missiles and radar systems, and the U.S. will unveil a new weapons package later in the day that will include high-tech, medium-range rocket systems.

German Chancellor Olaf Scholz told lawmakers that the IRIS-T SLM missiles it will send are “the most modern air defense system that Germany has.”

“With this, we will enable Ukraine to defend an entire city from Russian air attacks,” he said. He said Germany will also supply Ukraine with radar systems to help locate enemy artillery.

Western arms have been critical to Ukraine’s success in stymieing Russia’s much larger and better equipped military — thwarting its initial efforts to take the capital and forcing Moscow to shift its focus to completing its capture of the eastern industrial Donbas region.

But as the war drags on and Russia bombards towns in its inching advance, Ukraine has continued to plead for more weapons to defend itself. Ukrainian President Volodymyr Zelenskyy has occasionally criticized the West for moving too slowly in shipping in arms — and Germany has come under particular fire that it isn’t doing enough.

The U.S. package will include helicopters, Javelin anti-tank weapon systems, tactical vehicles, spare parts and more, two senior administration officials said Tuesday. The officials spoke on the condition of anonymity to preview the package before it is formally unveiled.

One official noted that the advanced rocket systems will give Ukrainian forces greater precision in targeting Russian assets inside Ukraine.

The announcements come as regional governor in the Donbas said Russian forces now control 70% of Sievierodonetsk, a city that is key to Russia’s efforts to seize the parts of the region not already controlled by Moscow-backed separatists.

Serhiy Haidai, the governor of the Luhansk region, told The Associated Press in written comments that street fighting is ongoing in the city, where about 13,000 people remain even though 90% of residential buildings have been damaged. Tens of thousands have fled the city, once home to about 100,000 people.

He noted that the only other city in the Luhansk region that Russians have not yet captured, Lysychansk, is still “fully” under Ukrainian control. “If the Russians manage to take full control over Sievierodonetsk within two to three days, they will start installing artillery and mortars and will shell Lysychansk more intensively,” Haidai said.

Separately, in a Telegram post on Wednesday, Haidai noted that some Ukrainian troops have pulled back from Sievierodonetsk.

“The evacuation (of civilians from the city) has been halted. There is no possibility to bring in humanitarian aid,” Haidai wrote.

Ukrainian President Volodymyr Zelenskyy, meanwhile. said the country is losing between 60 and 100 soldiers a day in the fighting and that another 500 are wounded.

He told the U.S. TV channel Newsmax Tuesday night that “the most difficult situation is in the east of Ukraine and southern Donetsk and Luhansk.”

In southern Ukraine, a regional governor said Russian troops are retreating and blowing up bridges to obstruct a possible Ukrainian advance. Vitaliy Kim, governor of the Mykolayiv region, said in messages on the Telegram app on Wednesday that Russia was on the defensive.

“They are afraid of a counterattack by the Ukrainian army,” Kim wrote. He didn’t specify where the retreat was happening. The parts of the Mykolayiv region which have been held by Russian forces in recent days are close to the large Russia-held city of Kherson.

Zelenskyy said in his nightly address there had been “some success in the Kherson direction” for Ukraine.