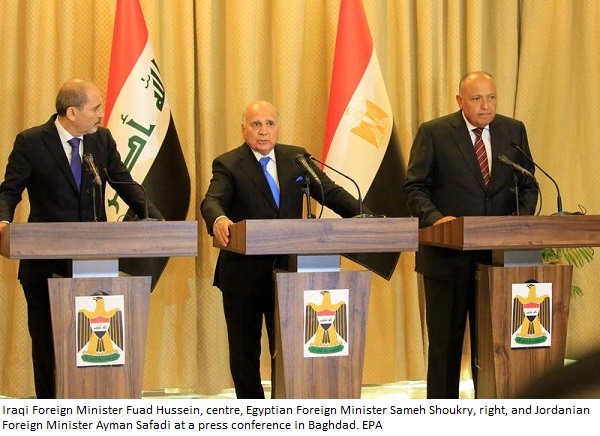 Iraq hosted a meeting with Jordan and Egypt on Monday to discuss the “big challenges” faced by the region.

The three countries have been meeting since 2020 to try to hammer out co-operation deals, mainly in the energy sector, but no major progress has yet been made.

On Monday, they also discussed Russia's war in Ukraine and its impact on politics, economy, energy and how to manage the energy crisis, Iraqi Foreign Minister Fuad Hussein said.

“We are facing numerous and big challenges at this period of time and this stage,” Mr Hussein told a press conference, flanked by his Jordanian and Egyptian counterparts.

“We are facing another challenge which is no less dangerous from coronavirus that is the war in Ukraine which affects a number of states, economies and communities, including those in our region.”

Mr Safadi said supplying Iraq with electricity will start early next year. He did not give more details.

“The joint co-operation among us is necessary in order to boost our capabilities to face the growing challenges in our region,” he said.

“We are looking forward to continue working and co-operation to boost the Arab security not only through the tripartite framework but also through the Arab League,” Egyptian Foreign Minister Sameh Shoukry said.

The US has been pushing Iraq and other Arab countries to strengthen ties to counter Iranian influence in the region, which has been growing since the US-led invasion that toppled Saddam Hussein's regime.

Top among other deals is to construct a 1 million-barrel capacity pipeline to export Iraqi crude oil from Jordan’s Port of Aqaba. Of that, 150,000 barrels a day would supply Jordan's Zarqa refinery.

The project has been delayed, however, owing to the worsening security situation in Iraq, a lack of cash and also objections from some political factions who see the project as against Iraqi interests.

By Sinan Mahmoud/ The National