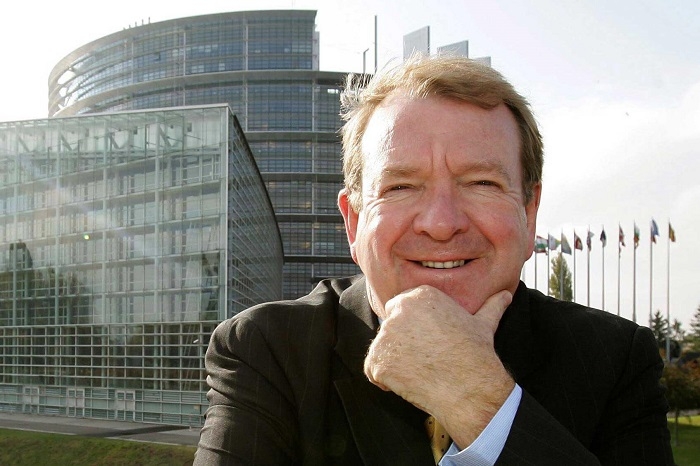 Struan Stevenson is the Coordinator of the Campaign for Iran Change (CiC). He was a member of the European Parliament representing Scotland (1999-2014), president of the Parliament's Delegation for Relations with Iraq (2009-14) and chairman of the Friends of a Free Iran Intergroup (2004-14). He is an international lecturer on the Middle East and president of the European Iraqi Freedom Association (EIFA).  in an Interview with our Magazine, he answered our questions as the following:

Gulan: What does the Russia-Ukraine war tell us about the great power politics? Have we been ushered into another cold war?

Mr. STRUAN STEVENSON: What can the West do when a deranged tyrant invades a sovereign neighbour, shells Europe’s biggest nuclear plant, destroys cities, bombs hospitals and schools, forces mothers to give birth in tube stations, kills and maims thousands of men, women and children, forcefully displaces over three million refugees and then claims to be fighting a Nazi government, despite the fact its president – Zelensky - is Jewish? This repetition of the horrors of 1939 that triggered the Second World War is now happening on Europe’s doorstep, in real-time. The dilemma of Ukraine has united world opinion against Vladimir Putin and Russia like never before.

With the occupation of South Ossetia and Abkhazia in Georgia in 2008, Putin was testing the reaction of Europe and the US to the use of violence. He discovered that there was little appetite for confronting the Russian bear. The West’s failure to react to the Georgian tragedy also gave Putin the green light to advance his claims on Ukraine. In March 2014 he achieved his objective, annexing Crimea and the city of Sevastopol as two federal subjects of the Russian Federation.

Gulan: In your perspective the Russian decision to invade Ukraine was primarily driven by what?

Mr. STRUAN STEVENSON: I met Vladimir Putin in Moscow in February 2009, when I was Vice President of the European People’s Party (EPP). I was with a high-level delegation from the European Parliament. I was the only UK representative on this small delegation. We had asked for the meeting due to the energy crisis that had hit Eastern Europe that winter. Gas supplies from Russia had dried up during a period of freezing weather conditions, causing many deaths in Poland, Romania and other EU Member States in Eastern Europe. Putin reacted angrily to our accusation that Gazprom had turned off gas supplies to the EU. He said that the gas pipeline to the EU ran through Ukraine and he blamed the Ukrainians for breaching the pipeline and stealing EU gas. He was antagonistic to the Ukrainians even then.

We asked Putin why the people of Eastern Europe had torn down all signs of the former Soviet Union after its collapse and yet in Moscow, hammer and sickle signs and red stars were evident on almost every public building. Putin fixed us with his steely gaze, his light-blue, wolverine eyes never wavering as he explained “To a large mass of our people who lived through that period, the Soviet Union was very important. We don’t want to destroy these symbols and tell them that their lives were lived in vain.” Putin’s answer made it clear to us where his loyalty and sympathies lay and his plan to invade Ukraine and reclaim the former territories of the USSR was probably already being formed even then.

It has been clear for years that the Russian president is trying to recreate his country’s imperial past by pursuing a strategy first set by Ivan the Terrible and followed by all his successors. Putin sees himself as the new tsar and his decision to launch a full-scale invasion of Ukraine is having catastrophic impacts globally. As a former KGB chief in Soviet-controlled East Germany, Putin has always regarded the Warsaw pact as a high point and the collapse of the USSR in 1991 as a temporary setback. Now, following his successful annexation of large parts of Georgia and the whole of Crimea without any noticeable reaction from the West, Russia’s direction of aggressive travel is again forward. He will have taken comfort from the chaotic withdrawal of US troops from Afghanistan, handing victory to the Taliban. He will, however, have been surprised and appalled by the massive and united reaction of the West to his invasion of Ukraine, which has wrecked the Russian economy. He will also be dismayed at the incompetence of the Russian military and their repeated defeats at the hands of the Ukrainians.

Putin has made no secret of his views on Ukraine. In an article he published in July 2021 he stated: “I am confident that the true sovereignty of Ukraine is possible only in partnership with Russia.” Putin claimed he was alarmed that Ukraine was on the waiting list of countries hoping to join NATO. He regarded that as a direct threat to Russia and demanded assurances from the West that it would not happen. In fact, his invasion of Ukraine has triggered the very opposite reaction, with even formerly neutral countries Sweden and Finland now seeking to join NATO. Putin’s illegal invasion of Ukraine has strengthened NATO inexorably.

Gulan: In your opinion where is this war heading? Do you expect a further and wider escalation of the war? Or do you expect that some negotiated settlement would be possible?

Mr. STRUAN STEVENSON: Putin has admitted to the loss of 30,000 Russian troops during the first 100 days of the war in Ukraine. The real toll may be much higher, together with a massive loss of military equipment, tanks, personnel carriers, planes, helicopters and even the Black Sea fleet Flagship Moskva. There is growing evidence of extreme unrest in Russian military ranks. Combined with the punitive sanctions and confiscation of property applied by the West to Russian oligarchs, I expect that there will be plots already underway to remove Putin from power and replace him with a more moderate president who will end the conflict and attempt reconciliation with the West.

Gulan: How do you assess the effectiveness of the West’s reaction to the Russian invasion, especially the rapid and sweeping sanctions against Russia?

Mr. STRUAN STEVENSON: As Putin gloats over the horror and havoc he has created in Ukraine, the world can look to the overwhelming majority of 141 countries who voted in the UN General Assembly emergency sitting, to condemn the invasion. Putin has achieved the exact opposite of what he had hoped. He has united the West like never before and turned his country into a pariah state. According to a report published in December last year and commissioned by NATO, Russia will remain the main threat facing the US-led military alliance for at least the rest of this decade. The report highlighted the risks posed by Russia’s “broader hybrid toolkit including offensive cyber, state-sanctioned assassinations and poisonings — using chemical weapons, political coercion and other methods.”

Gulan: To what extent will this war dramatically change Europe’s calculation in terms of energy and security?

Mr. STRUAN STEVENSON: Putin invasion of Ukraine has led to the total mothballing of the 1,230 km-long Nord Stream 2 gas pipeline from Russia to Germany. Chancellor Olaf Scholz has agreed with pleas from Joe Biden not to switch on the pipeline, recently completed at a cost of $11 billion. The war in Ukraine and an EU-wide partial boycott of Russian oil and gas has caused prices to soar internationally. So, Russian aggression in Ukraine is already having a direct impact on us all. It has shown the EU in particular, the danger of placing too much reliance on energy imports from a single source. It has also convinced the EU and the West in general of the need to intensify security.

Gulan: How do you see the implications of this war for the Middle East?

Mr. STRUAN STEVENSON: Initially, oil and gas exporting countries in the Middle East will benefit from the huge surge in prices caused by the Ukraine invasion and the boycott of Russian energy. However, the global impact on food security caused by the war in Ukraine will have a damaging impact on food prices.

Russia’s invasion of Ukraine leaves few agricultural markets untouched and threatens food security for millions. The war has curtailed food exports from Ukraine and Russia, particularly wheat, maize, and sunflower oil, increasing the price of these commodities, while driving up demand for substitute products, including alternative cooking oils, and reduced exports of fertilizer from the Black Sea, shifting the quantity and nature of crops producers plan to grow worldwide. The high cost of energy has also added upward pressure to food and fertilizer prices.

According to the Food and Agriculture Organization of the UN (FAO), fifty countries rely on Russia and Ukraine for at least thirty percent of their wheat imports. In the Middle East and North Africa, these countries include Lebanon, Egypt, Libya, Oman, Saudi Arabia, Yemen, Tunisia, Iran, Jordan, and Morocco.

Countries in the Middle East who have developed significant trade with Russia may also have to re-think their economic strategies, not least to avoid falling foul of EU, US and UK sanctions.