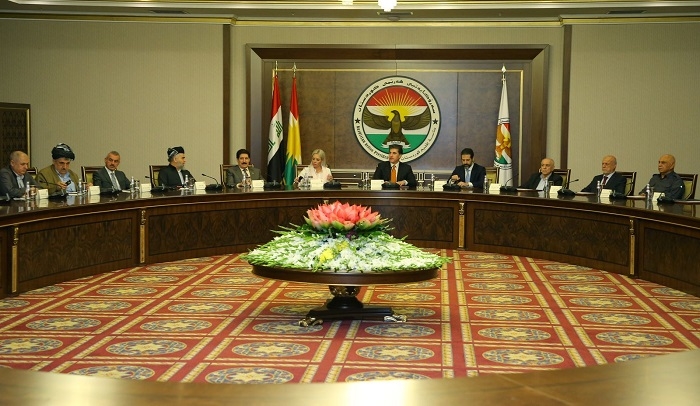 Kurdistan Region President Nechirvan Barzani chaired a meeting with political parties of the Kurdistan Region on Thursday in Erbil, attended by Ms. Jeanine Hennis-Plasschaert, Special Representative of the Secretary-General for the United Nations Assistance Mission for Iraq (UNAMI), and her accompanying team of election experts of the UNAMI.

The meeting was dedicated to the preparations for the upcoming Kurdistan parliamentary elections and efforts to bring the political factions closer together on a number of issues, including the election law, the Independent High Electoral Commission, the opinion polls and other issues related to the elections.

The meeting strongly condemned the terrorist drone attack of Wednesday night, June 8, 2022 on Erbil, the capital of the Kurdistan Region, which caused civilian casualties and civilian property damage. It was affirmed that the attack was a serious threat to the security and stability of Iraq. The Iraqi Federal Government was urged to end these aggressions and make serious efforts to prevent the repetition of such attacks in coordination with the Kurdistan Regional Government’s security agencies.

President Nechirvan Barzani thanked Ms. Plasschaert for her efforts in Iraq and her support of the Kurdistan Region and for the issue of the parliamentary elections. The President also thanked the political parties for accepting the invitation of the Presidency to attend the meeting.

After the discussion and exchange of views, all the participants agreed on the importance of holding a successful election in a way that the Kurdistan Region’s national interests and the process of democracy should be given the highest priority. Furthermore, the Presidency of the Region will continue its efforts to solve the problems facing the election law. For this purpose, the meeting decided to establish a secretariat in the Presidency of the Kurdistan Region in coordination with the UNAMI team to follow up and continue the efforts with the political parties and prepare a report by July 1, 2022.