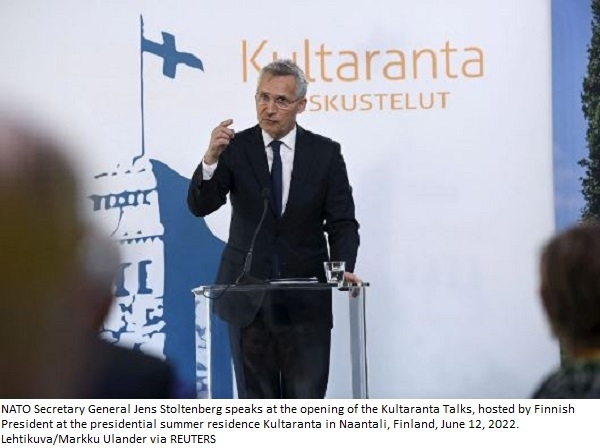 Sweden and Finland applied to join the alliance last month, in response to Russia's invasion of Ukraine. Their applications have faced unexpected opposition from Turkey, which has been angered by what it deems is Swedish support of Kurdish militants and by a previous decision to withdraw arms export licenses to Turkey.

"I welcome that Sweden has already started to change its counter-terrorism legislation and that Sweden will ensure that the legal framework for arms export will reflect the future status as a NATO member with new commitments to allies," Stoltenberg said during a press conference with Swedish Prime Minister Magdalena Andersson.

"These are two important steps to address concerns that Turkey has raised."

Andersson said Sweden had changed its terrorism laws and was in the process of further tightening.

Stoltenberg also said the aim was to have Sweden and Finland join NATO "as soon as possible" and that it was inconceivable that NATO allies would not come to Sweden's defence if it were attacked.