Macron meets Zelensky in Kyiv after visit to war-devastated Irpin 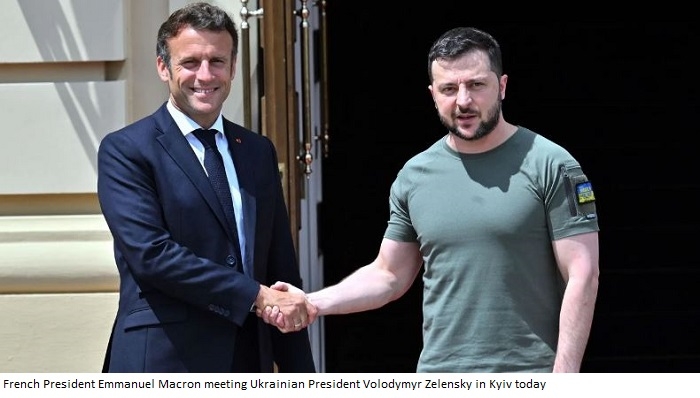 French President Emmanuel Macron met with Ukrainian President Volodymyr Zelensky in Kyiv on Thursday after visiting the war-scarred town of Irpin, where Macron praised Ukrainians for their “heroism” in the face of the Russian invasion. The French leader, German Chancellor Olaf Scholz and Italian Prime Minister Mario Draghi arrived in Ukraine earlier Thursday to deliver “a message of European unity”, Macron said.

12:48pm: Macron and Zelensky meet in Kyiv after French leader’s visit to Irpin

Macron and Zelensky's meeting in Kyiv was the first time the two leaders met physically since Russia invaded Ukraine in February.

11:38am: Macron praises ‘heroism’ of Ukrainians in visit to Irpin

French President Emmanuel Macron praised Ukrainian "heroism" in the face of Russia's invasion on a visit Thursday to the Kyiv suburb of Irpin, the closest Moscow's army got to the capital at the start of its invasion.

"It's here, among other places, that the Ukrainians stopped the Russian army descending onto Kyiv," Macron said. "It represents the heroism of the army, but also of the Ukrainian population. And alongside that, you have traces of barbarism."

Macron said that massacres and war crimes have been committed in Irpin, according to Reuters.

10:40am: Macron, Scholz and Draghi visit town of Irpin

French President Emmanuel Macron, German Chancellor Olaf Scholz and Italian Prime Minister Mario Draghi visited Irpin on Thursday, a battle-damaged suburb of Ukraine's capital, in a show of support for the country at war with Russia.

The European leaders arrived in the town north of Kyiv, AFP reports, where residential buildings and civilian infrastructure remain damaged following Russian troops' attempts early in the invasion to capture the capital.

10:05am: Macron, Scholz and Draghi visit Kyiv in show of support for Ukraine

9:30am: Kyiv visit 'a message of European unity', Macron says

French President Emmanuel Macron said he and German Chancellor Olaf Scholz and Italian Prime Minister Mario Draghi will meet Ukrainian President Volodymyr Zelensky and go to "a war site where massacres have been committed" during the European leaders' visit to Kyiv.

"This is a message of European unity addressed to Ukrainian men and women, of support," Macron said as he descended from the train that he, Scholz and Draghi had boarded in Poland on Thursday morning.

Macron said he came to Ukraine "to talk about both the present and the future since the coming weeks, we know, will be very difficult".

8:41am: Macron, Scholz and Draghi arrive in Kyiv

Macron told reporters in Kyiv that he will pass on a message of “European solidarity” to Ukrainian President Volodymyr Zelensky, Reuters reports.

The visit by the three European leaders has taken weeks to organise with the heads of state looking to overcome criticism within Ukraine over their response to the war.

Kyiv has criticised France, Germany and to a lesser extent Italy for alleged foot-dragging in their support for Ukraine, accusing them of being slow to deliver weapons.

7:52am: Ukraine pleads for more weapons as European leaders head to Kyiv

Ukrainian officials have been saying they urgently need more weapons to fend off Russian advances in the south and the east, an appeal aimed at the West as French President Emmanuel Macron, German Chancellor Olaf Scholz and Italian Prime Minister Mario Draghi travel to Kyiv on Thursday. FRANCE 24's Catherine Norris Trent reports from Ukraine's capital.

The three leaders left in the morning, according an AFP video, which showed the trio sitting together in a train compartment.

It is the first time that the leaders of the three European Union countries have visited Kyiv since Russia's February 24 invasion of Ukraine.

They are due to meet Ukrainian President Volodymyr Zelensky, and the visit comes as Kyiv is pushing for membership in the EU.

7:10am: Macron, Scholz and Draghi expected to visit Kyiv today

The leaders of France, Germany and Italy are expected to visit Kyiv on Thursday, a day after the United States announced $1 billion worth of new arms for embattled Ukrainian forces. Kyiv's troops are resisting a fierce onslaught in the Donbas region by Russian forces, which are pushing to seize a swathe of eastern and southern Ukraine.

In a show of support, French President Emmanuel Macron, German Chancellor Olaf Scholz and Italian Prime Minister Mario Draghi are expected in Kyiv. While there has been no official announcement about the trip, Macron is already in the region, having visited Ukraine’s neighbours Romania and Moldova in recent days.

6:55am: Russia, US must discuss nuclear treaty extension, says Kremlin

Russia and the United States must discuss the extension of the START nuclear arms reduction treaty, Kremlin spokesman Dmitry Peskov told the RIA news agency in an interview on Thursday.

The matter was important for global security and Russia's military operation in Ukraine was no reason to avoid its discussion, Peskov added.

Ukrainian President Volodymyr Zelensky said Wednesday that he was “grateful” for the latest $1 billion arms package promised by US President Joe Biden, even as troops showed off freshly delivered French artillery on the battlefield in the fierce fight for the eastern Donbas region.

Ukrainian officials also met in Brussels Wednesday with Western allies, hoping to obtain more ammunition and more lethal weapons to turn the tables on the invaders.

Zelensky said later in his evening address to the people of Ukraine that he was grateful for the package.

“The United States announced new strengthening of our defence, a new $1 billion support package,” Zelensky said. “I am grateful for this support, it is especially important for our defence in Donbas.”

Russia’s war in Ukraine has pushed the number of people who are displaced around the world above 100 million for the first time, and the UN warns a deepening food crisis could force many more to flee their homes.

Efforts to address global food insecurity, which has been dramatically aggravated by Russia’s invasion of Ukraine, is “of paramount importance ... to prevent a larger number of people moving”, UN refugee chief Filippo Grandi told reporters.

1:15am: Two US citizens missing, feared captured, in eastern Ukraine

Two US citizens who travelled to Ukraine as volunteer fighters against Russian forces have been missing for a week and are feared captured, family members said on Wednesday.

Alexander Drueke, 39, of Tuscaloosa, Alabama, and Andy Huynh, 27, of Hartselle, Alabama, were last in contact with their families on June 8 and did not return from a mission around the Kharkiv region of eastern Ukraine.

Reports that the two men have been taken prisoners of war by Russia are unconfirmed, the families and a US State Department spokesperson said.

“What we know officially at this point from the State Department is that Andy and Alex are missing,” Joy Black, Andy’s fiancée, said by phone.

“We do not have confirmation for anything beyond that. Obviously the longer the search goes the more we start to consider other scenarios,” she added.

Russia’s defence ministry did not immediately respond to a request for comment.

If the pair have been captured, they would be the first confirmed US citizens to have been taken as prisoners of war in the conflict.

White House national security spokesperson John Kirby said that if the reports are true, the United States “will do everything we can” to get them back.

(FRANCE 24 with REUTERS and AFP)