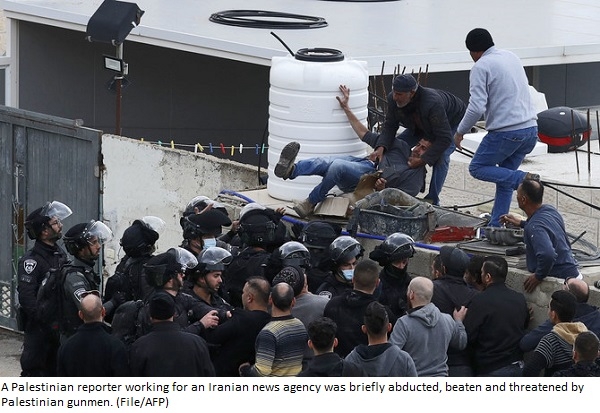 A Palestinian reporter working for an Iranian news agency was briefly abducted, beaten and threatened by Palestinian gunmen after covering the violent dispersal of an Islamist student demonstration in the West Bank earlier this week.

The Tasnim news agency says the men forced Samer Khuaira into a car at gunpoint on Tuesday, beat him and threatened him. The men said his coverage harmed the Palestinian Authority and the secular Fatah movement that dominates it, Tasnim said. He was released around a half hour later.

Khuaira identified one of his abductors as a member of Palestinian security forces, Tasnim reported Thursday. The Palestinian Journalists Union condemned the attack on their colleague.

Security guards at al-Najah University in Nablus had violently dispersed the Islamist students earlier on Tuesday. Videos circulated online showed the guards beating students and what appeared to be plainclothes security forces firing into the air near the university.

Fatah dominates security agencies that operate in the parts of the Israeli-occupied West Bank where the PA has limited autonomy.