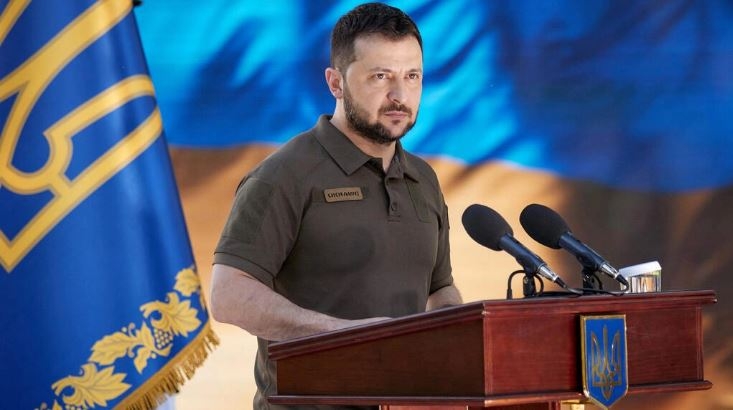 President Volodymyr Zelensky hailed Brussels' support for Ukraine's European Union bid a historic achievement, as his country's eastern Donbas region faced intense Russian shelling. Brussels spearheaded a powerful show of European solidarity on Friday by backing Kyiv's bid for EU candidate status, an endorsement that could add Ukraine to the list of countries vying for membership as early as next week.

The governor of Ukraine's eastern Luhansk region, Serhiy Gaidai, said Saturday that "fierce battles" with Russia raged in villages outside the city of Severodonetsk, which Moscow's forces have been trying to seize control of for weeks.

"Now the most fierce battles are near Severodonetsk. They (Russia) do not control the city entirely," Gaidai said on Telegram.

"In nearby villages there are very difficult fights – in Toshkivska, Zolote," he said.

Gaidai also said that Lysychansk, a Ukrainian-controlled city across a river from Severodonetsk, is being "heavily shelled".

"They cannot approach it and that's why they are simply shooting at the city with air strikes," he said. "It is very dangerous in the city."

Gaidai said there was "more destruction" at the Azot chemical plant in Severodonetsk, where hundreds of civilians are sheltering.

He said on Friday that 568 people, including 38 children, were hiding in the factory and that only a "complete ceasefire" would ensure their evacuation.

9:19am: Ukrainian medic who had recorded video footage of Mariupol freed by Russian forces, AP reports

A celebrated Ukrainian medic whose video footage was smuggled out of the besieged city of Mariupol by an AP team was freed by Russian forces on Friday, three months after she was taken captive on the streets of the city.

Yuliia Paievska, known in Ukraine as Taira, had used a body camera to record her team’s efforts over two weeks to save the wounded, including both Russian and Ukrainian soldiers.

She transferred the clips to an AP team in Mariupol, one of whom fled with it embedded in a tampon on March 15. Paievska and a colleague were taken prisoner by Russian forces on March 16, the same day a Russian airstrike hit a theatre in the city centre, killing around 600 people according to an Associated Press investigation.

“It was such a great sense of relief. Those sound like such ordinary words, and I don't even know what to say,” her husband, Vadim Puzanov, told AP late Friday. Puzanov said he spoke by phone with Paievska, who was en route to a Kyiv hospital, and feared for her health.

7:11am: Russian state TV airs videos of two US military veterans who had been in Ukraine

A Russian state TV channel aired videos on social media of two Americans who went missing last week while fighting alongside the Ukrainian army, stating they had been captured by Russian forces.

United States President Joe Biden had said earlier Friday he did not know the whereabouts of Alexander Drueke and Andy Huynh, both US military veterans whose relatives lost contact with the pair.

The missing Americans – including a third identified as a former US Marines captain – are believed to be part of an unknown number of mostly military veterans who have joined other foreigners to volunteer alongside Ukrainian troops.

A US State Department spokesperson on Saturday confirmed American authorities had seen the photos and videos of the two US citizens "reportedly captured by Russia's military forces in Ukraine".

"We are closely monitoring the situation and our hearts go out to their families during this difficult time," the spokesperson told AFP.

Ukrainian President Volodymyr Zelensky on Friday praised a decision by the European Commission to give its backing for Kyiv to be granted EU 'candidacy status', nearly four months into Russia's invasion of the country.

"It's the first step on the EU membership path that'll certainly bring our victory closer," Zelensky wrote on social media, adding that he was "grateful" to Commission chief Ursula von der Leyen and "each EC member for a historic decision".

Formal "candidate" status for Ukraine could open up a years-long path towards joining the bloc, with the decision likely to be formalised at an EU leaders' summit on June 23-24.

Ukrainian Foreign Minister Dmytro Kuleba described the EC's backing as "European history in the making" in a post on social media and called for Ukraine to be granted full candidacy status.

"This will be a vivid proof of European leadership and a huge boost for Ukraine's further transformations," he said.

Ukraine's ambassador to the UN, Sergiy Kyslytsya, hailed on social media what he described as a "truly historic day for Ukraine and Europe".

He said many Ukrainians "have already paid the ultimate price" for the European Commission's backing for Kyiv's EU candidacy status.