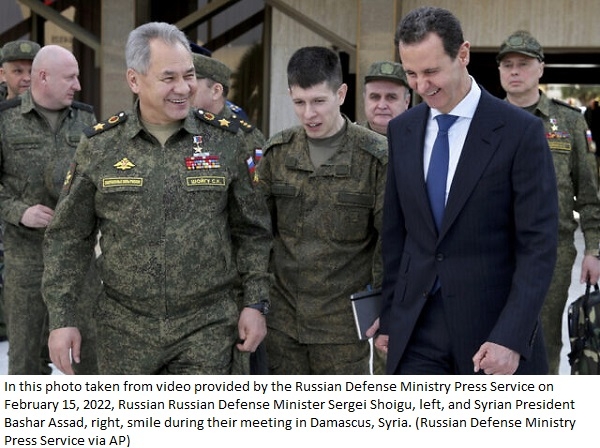 Hundreds of Syrian paratroopers take part in a joint drill with their Russian counterparts in the war-torn country in the second joint maneuver this month, state media reports.

The agency does not give further details in its Saturday night report about the drill or say where they took place. It said the aim was to train Syrian paratroopers how to respond in varied circumstances.

Russia is a main backer of President Bashar Assad and has a broad presence in Syria where an 11-year conflict has killed hundreds of thousands and displaced half the country’s pre-war population.

Russia became involved militarily in Syria in September 2015 helping to tip the balance of power in favor of Assad’s forces.

Earlier this month, the Syrian and Russian air forces conducted drills over different parts of the country, including on the edge of the Israeli-occupied Golan Heights.

Four months ago, the two countries conducted a drill a week before Russia began its invasion of Ukraine on Feb. 24. In mid-February, the Russian military deployed long-range nuclear-capable bombers and fighter jets carrying state-of-the-art hypersonic missiles to Syria for massive naval drills in the Mediterranean Sea.