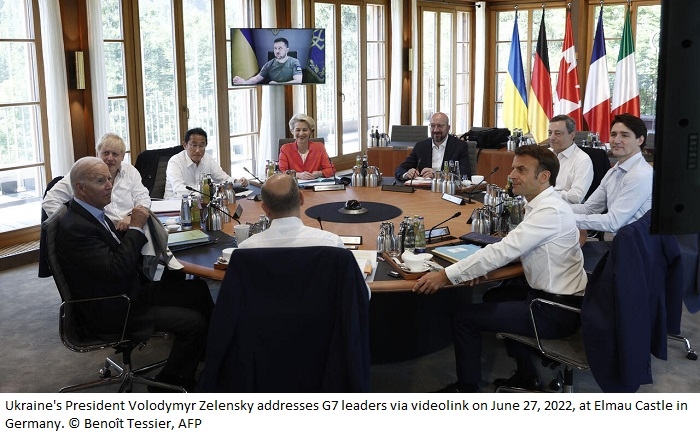 President Volodymyr Zelensky on Monday urged world powers to step up their support for Ukraine via arms and sanctions as he addressed the G7 summit via videolink from Kyiv after the capital was hit by the first Russian strikes in weeks. In the eastern Luhansk province, meanwhile, the governor urged all civilians to leave the city of Lysychansk – the last big city in the region still held by Ukrainian troops.

Leaders of the Group of Seven wealthy democracies on Monday pledged to stand with Ukraine “for as long as it takes” by cranking up sanctions on Russia and backing security commitments for Kyiv in a post-war settlement.

“We will continue to provide financial, humanitarian, military and diplomatic support and stand with Ukraine for as long as it takes,” it said in a statement, which also contained ways the G7 could do so, as well as a list of demands on Russia.

It said that Moscow must “immediately” return Ukrainians who have been taken by force, and that Russia must allow grain shipments to leave Ukraine to avoid exacerbating a global food crisis.

The group also expressed “serious concern” over Russia’s plans to deliver missiles capable of carrying nuclear warheads to Belarus in the coming months. “We urge Russia to behave responsibly and exercise restraint,” the leaders of the world’s top industrialised nations said in a statement.