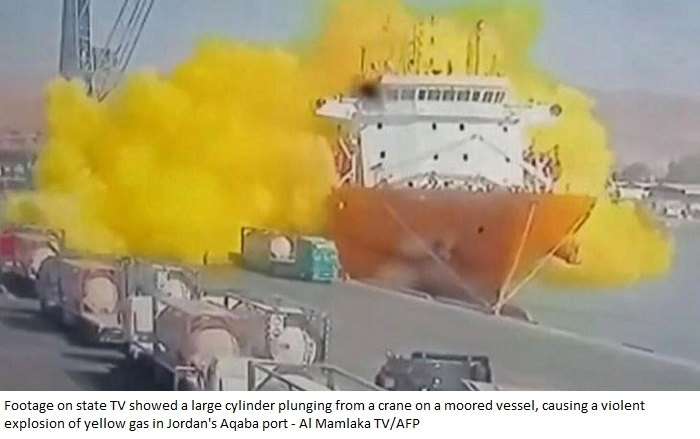 Thirteen people were killed, including at least four Asian migrants, when toxic chlorine gas escaped on the dockside in the Jordanian Red Sea port of Aqaba, officials said.

More than 250 people were injured in the accident on Monday, of whom about 100 remained in hospital, according to the latest updates.

Most were being treated for the effects of breathing chlorine gas, a common cleaning agent that also has a range of other industrial uses and can be employed as a chemical weapons agent.

"All of the injured are suffering from similar symptoms, shortness of breath, a heavy cough and vertigo," said Dr Rouba Aaamawi of the Islamic Hospital in Aqaba which was treating 70 people, some on respirators.

Assadallah al-Jazi, a 25-year-old fertiliser company employee, was among those hurt.

"We didn't hear any explosion. We just smelt something noxious and saw the yellow smoke, then there were people choking," he said.

The port began returning to normal Tuesday, with all docks due to reopen except for Dock Four, where further safety checks were to be carried out, said Interior Minister General Mazen al-Faraya.

"The situation in Aqaba is now under control," Prime Minister Bisher al-Khasawneh said after visiting the port late Monday.

The chlorine escaped when the cable snapped on a crane loading a tank of liquefied gas onto a ship, sending it crashing to the ground on the dockside.

The force of the fall punctured the pressurised container, enveloping the freighter Forest 6 in a shroud of the bright yellow gas, closed circuit TV images from the port showed.

The fallen white tank, punctured and stained yellow from where the gas burst out, came to rest on the dock directly beside the Forest 6 vessel. Ship-tracking websites say the deck cargo ship was built only this year and sails under a Hong Kong flag.

On Tuesday, civil defence forces were seen inspecting the scene of the spill, some dressed in hazmat suits.

The director of the port's grain silos, Imad Tarawneh, said they would remain closed for two days while health inspectors checked there had been no contamination of stocks.

He said there would be no impact on port traffic as there were currently no grain carriers in dock.

"The silos are built of concrete and are hermetically sealed but, despite that, all necessary precautions are being taken and all loading and unloading operations have been halted," he said.

The head of the Aqaba Company for Ports Operation and Management, Khaled Maayta, said the grain silos were just 600 metres (yards) from the site of Monday's spill.

"The injured people are in medium to critical condition," he added.

As Jordanian hospitals struggled to cope with the number of casualties, neighbouring Saudi Arabia put the general hospital in the border town of Haql on alert to help treat those injured.

Civil defence spokesman Amer al-Sartawy said more than 2,700 security and emergency personnel were deployed to the scene, and about 45 of them ended up among the injured.

A medic helps a man suffering from breathing difficulties after inhaling chlorine gas during Monday's leak in the Jordanian port of Aqaba Khalil MAZRAAWI AFP
Aqaba's nearby south beach, which is popular with tourists, was evacuated after Monday's accident, as were adjacent residential areas but residents were later told they could return to their homes.

Aqaba tourist department official Nidal al-Majali said the lack of wind on Monday helped to prevent the gas cloud spreading outside the port.

Aqaba is Jordan's only maritime gateway and a transit point for the lion's share of its imports and exports.

It occupies a narrow stretch of Red Sea coastline between the Israeli and Saudi borders and lies just 15 kilometres (10 miles) from the Israeli port and seaside resort of Eilat.

A spokeswoman for Israel's Environmental Protection Agency said there was no risk to health in Eilat as the prevailing winds were in the other direction.

The Israeli defence ministry expressed its condolences and offered aid.

Chlorine has a range of industrial uses and is infamous for its use as a chemical weapons agent in World War I. It attacks the respiratory system, skin and eyes.