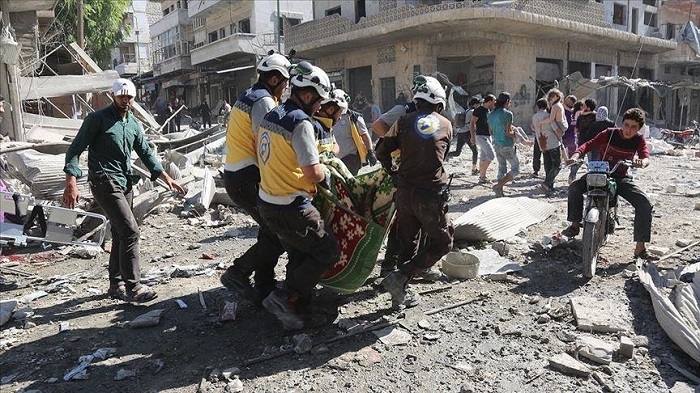 Nearly 307,000 civilians were killed between March 1, 2011, and March 31, 2021, the highest estimate of conflict-related civilian deaths in Syria, the UN Human Rights Office said Tuesday in a new report.

The Human Rights Office said its report followed rigorous assessment and statistical analysis of available data on civilian casualties and estimated that 306,887 civilians were killed in the 10-year period.

“The conflict-related casualty figures in this report are not simply a set of body_abstract numbers, but represent individual human beings,” UN High Commissioner for Human Rights Michelle Bachelet said.

“The impact of the killing of each of these 306,887 civilians would have had a profound, reverberating impact on the family and community to which they belonged.”

The analysis from the report will also give a clearer sense of the severity and scale of the conflict, said the UN rights chief, and does not include deaths of combatants.

The report was mandated by the UN Human Rights Council and referred to 143,350 civilian deaths that various sources with detailed information have individually documented.

These include at least their full name, date, and location of death using statistical estimation techniques of imputation and multiple systems estimation to connect the dots where there were missing information elements.

“This does not include the many, many more civilians who died due to the loss of access to healthcare, to food, to clean water, and other essential human rights, which remain to be assessed,” said Bachelet

The estimate of 306,887 means that, on average, every day, for the past 10 years, 83 civilians suffered violent deaths due to the conflict, said the report.

The report notes that “the extent of civilian casualties in the last 10 years represents a staggering 1.5% of the total population” of Syria at the beginning of the conflict.

It raises “serious concerns as to the failure of the parties to the conflict to respect international humanitarian law norms on the protection of civilians,” said the report.

In 2013 and 2014, the UN Human Rights Office commissioned three statistical analyses of documented killings in Syria, but it was discontinued as the situation in the country grew more dangerous.

In 2019, the Human Rights Office resumed information gathering and analysis on casualties in Syria in its global reporting on the UN Sustainable Development Goals indicator on conflict-related deaths.

“Where civil society actors undertake casualty recording, efforts…can put the recorders themselves at risk. They also face multiple challenges in their documentation efforts, including the collapse of their usual networks of information,” said the report.

This is because people are on the move, displaced, or in areas where there is a general information shut-down; the limited, or lack of, access to mobile data, internet, and electricity to collect and transmit information; limitations on their movements; and surveillance, said the report.

To produce the report, the office used eight sources of information relating to different periods across the 10 years covered.

“Unless and until the conflict ends, there is a continued risk of civilian deaths,” says the report.

“It is therefore critical that all states, the United Nations, and civil society use all available means to end the conflict and support a transition to peace.”