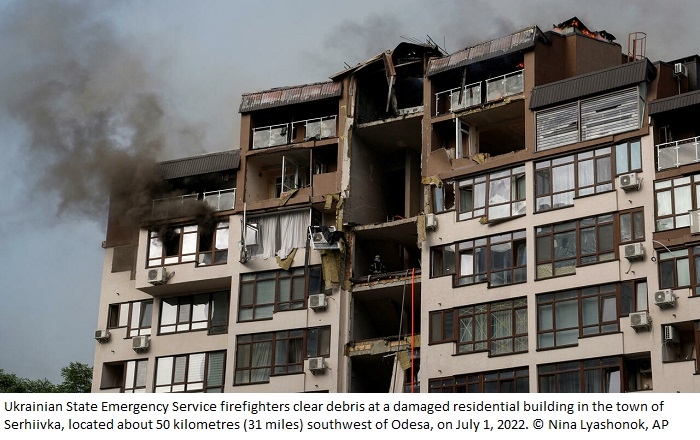 Powerful blasts rocked Ukraine's city of Mykolaiv in the early hours of Saturday, a day after authorities said 21 people were killed in Russian missile strikes near Odesa on the Black Sea.

Russian forces destroyed five Ukrainian army command posts in the Donbas and in the Mykolaiv region with high-precision weapons and also struck three storage sites in the Zaporizhzhia region, the defence ministry was quoted on Saturday as saying.

The ministry, cited by Russian news agencies, also said the Russian air force had struck a Ukrainian weapons and equipment base at a tractor factory in Kharkiv, in northeast Ukraine.

Powerful explosions rocked the Ukrainian city of Mykolaiv early on Saturday, the mayor said, a day after authorities said at least 21 people were killed when Russian missiles struck an apartment building near the Black Sea port of Odesa.

Air raid sirens sounded across the Mykolaiv region, which borders the vital exporting port of Odesa, before the blasts.

“There are powerful explosions in the city! Stay in shelters!” Mykolaiv Mayor Oleksandr Senkevich wrote on the Telegram messaging app.

It was not immediately known what caused the explosions. Reuters could not independently verify the report.

The United States is sending Ukraine two NASAMS surface-to-air missile systems, four additional counter-artillery radars and up to 150,000 rounds of 155mm artillery ammunition as part of its latest weapons packages for Ukraine, the Pentagon said on Friday.

The assistance package, worth about $820 million, was broadly announced by US President Joe Biden on Thursday in Madrid following a gathering of NATO leaders that was focused on Russia’s invasion of Ukraine.

“Ukrainians continue to face a brutality highlighted once again this week by an attack that struck a shopping mall filled with civilians. They continue to fight for their country, and the United States continues to stand by them and their just cause,” US Secretary of State Antony Blinken said in a statement about the assistance.