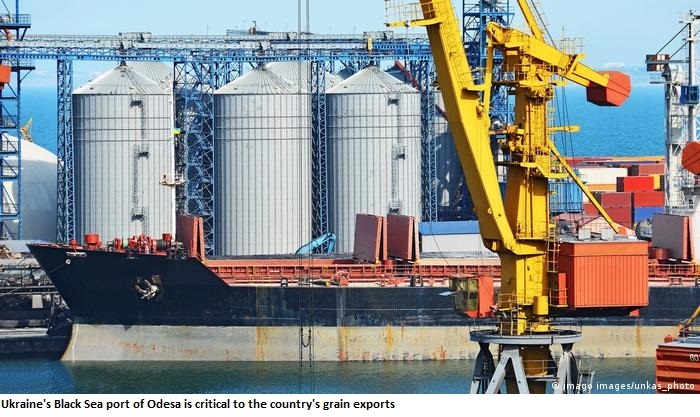 Ukraine's military says Russia has struck the Black Sea port of Odesa, hours after the two warring parties signed a pact to ensure the safe passage of Ukrainian grain exports. DW rounds up the latest.

Russian missiles hit infrastructure in the Ukrainian port city of Odesa on Saturday, the Ukrainian military said, dealing a blow to a deal signed on Friday to unblock grain exports.

Two missiles hit infrastructure at the port, while another two were shot down by air defense forces, it said.

Hours earlier, Moscow and Kyiv signed a landmark United Nations-brokered deal seen as crucial to reining in global food prices and would allow certain exports to be shipped from Black Sea ports, including the hub of Odesa.

Russian troops blocked millions of tons of grain from leaving Ukrainian ports for export shortly after the invasion began in February.

US Ambassador to Kyiv Bridget Brink described Saturday's attack as "outrageous," and said Russia must be held to account.

Ukraine's foreign ministry called on the UN and Turkey, which mediated Friday's deal, to ensure that Russia fulfills its commitments and allows free passage in the grain corridor.

"It took less than 24 hours for Russia to launch a missile attack on Odesa's port, breaking its promises and undermining its commitments before the UN and Turkey under the Istanbul agreement,'' Foreign Ministry spokesman Oleg Nikolenko said. "In case of non-fulfillment, Russia will bear full
responsibility for a global food crisis."