President Nechirvan Barzani: Normalization of Sinjar status must be realized 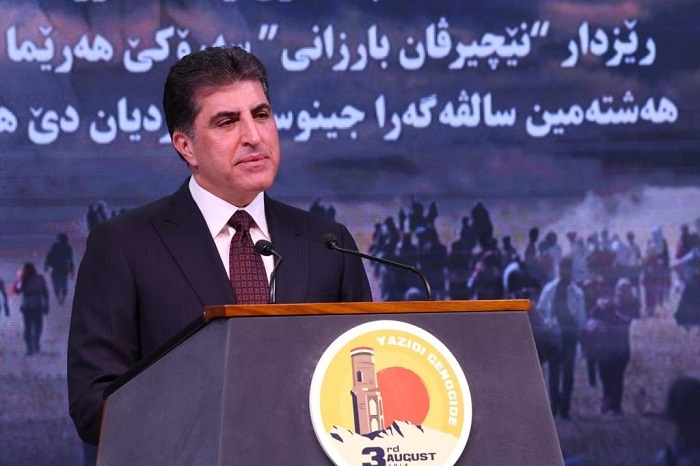 President Nechirvan Barzani participated in a ceremony held in Semeli district of Duhok province today to commemorate the 8th anniversary of the genocide of the Yezidis in Shingal (Sinjar) and its surroundings by the terror group ISIS. The ceremony was also attended by representative of the Iraqi Prime Minister Mustafa Kadhimi, representatives of the United Nations, foreign Consulates and Missions, party and government officials in Duhok and Mosul provinces, relatives of the victims and a large number of Yezidis.

Governor of Dohuk and the Minister of Martyrs’ Affairs also addressed the commemoration ceremony. The President delivered the following speech:

Dear families of the Shingal tragedy,
Ladies and Gentlemen,

First and foremost, I would like to welcome you all, especially the representative of Prime Minister Mustafa Kadhimi who is here with us today; the Consul Generals in Kurdistan Region who have come here from Erbil. I welcome you all.

Today, we are remembering the 8th anniversary of the Shingal genocide with grief and pain. This was the greatest tragedy of the 21st century inflicted upon the Yezidis and the people of Kurdistan. We salute the innocent souls of the martyrs of the Yezidis.

This mass-crime of ISIS, was another episode of murderous crimes in the history of Kurdistan and another round of mass-murder against the Yezidis. Five thousand Yezidi women, children and men were victimized. Until now 2,717 Yezidis are still missing, 325 thousand are in camps. 100 thousand Yezidis are scattered around the world as refugees. Most of Shingal has been devastated with its population sent to refuge.

Imagine, that during few days thousands were executed and buried together in mass graves. Thousands of girls and Yezidi sisters were abducted and sold into slavery. By the use of force and threats of killing, they wanted to make Yezidis change their faith.

My Yezidi sisters and brothers,

I know you are filled with agony and pain. Your pain is unimaginable. You are a people full of grief. But we need to always remember the extent of this tragedy. We need to work to reduce its impact and make sure that it does not happen again.

There is a Yezidi saying which goes:

“There are a people full of sorrow,
With no sleeps at night,
They are wondering because of their people,
With no place to rest, here or in another world.”

My fellow Yezidi sisters and brothers,

In the first day of the tragedy, we vowed to do everything to protect the Yezidis. Despite the destruction of Shingal, yet the abduction and selling of our Yezidi sisters and mothers were the hardest for the Yezidis and all the people of Kurdistan. It is still a pain that has not been forgotten.

Right at that time, we established an office, which have so far rescued 3554 women, men and children. We have promised to rescue all the abducted. And it is our duty to do so. This is an open wound, which will not heal for none of us. I ask anyone who has knowledge of the abducted to contact the Office of Abducted Yezidis so that we are able to rescue them and bring them home to their loved ones.

At the time of the tragedy, the Kurdistan Regional Government together with the people of Dohuk and the United Nations, accommodated the refugees from Shingal swiftly. The support of the people was and still is greatly appreciated. Many thanks to the people of Dohuk, Zakho and the Badinan area. We appreciate the support of all the people of this area including the religious clerics, intellectuals, collage professors, teachers, everyone who took part in the efforts to support our Yezidi displaced. We will never forget this. In some places Muslim clerics decided to evacuate mosques to accommodate the displaced. This image of coexistence especially in Kurdistan and more especially in Dohuk province is a source of pride for our people, for the Dohuk province, for Kurdistan and for all of us. And it should be strongly promoted.

Right at that time, our president Masoud Barzani vowed to liberate Shingal and protect the Lalesh and Sharafadin Shrines. He set up his headquarters in Shingal and did not give up until Shingal was liberated. And he delivered his promise.

The Peshmargas who gave their lives to liberate Shingal and protected the Shingal Mountain are always valued and saluted by the people of Kurdistan. Their heroism and blood prevented ISIS to annihilate the Yezidi people.

I thank all the Yezidi and Kurdistani organizations and people who have worked to make the Shingal tragedy known around the world and supported the plight of the Yezidis. I thank the coalition partners who helped us at the time to free Shingal. I hope that they continue until this tragedy will be internationally recognized as genocide.

Kurdistan and the Yezidism is a shared identity of our history, our people and our geography. Yezidim is an ancient faith of Kurdistan and before other religions, Yezidim organized the life and relations of people in Kurdistan.

Yezidis have preserved the richness of the language and culture of Kurds and Kurdistan in their original texts and hymns. Kurdistan is the centre of Yezidism. Yezidis being in Kurdistan is the condition for the Yezidis to survive and thrive.

This is why the Yezidis should remain on their land in Shingal, in Kurdistan. They should not abandon the sacred Lalesh. The sacred Lalesh must remain and thrive.

Being far away from Kurdistan will be a great threat to the very survival and existence of Yezidism. Kurdistan and Yezidism are two sets of beliefs and geography that are intertwined and no one can separate them. Because the faith of the Yezidis will be stronger in and by being in Kurdistan. As the saying goes:

“Reply to Kurdistan,
Strengthen your faith,
Sharafadin is the Prince of the Diwan.”

I urge all the international community to support the Shingal district and the Yezidis who have been the victims of genocide. Yezidis must be helped and supported on their land in Shingal, which must be reconstructed. Being refugees around the world is a great threat to the very existence and survival of the Yezidis.

Similar to all the people of Kurdistan, the Yezidis faced genocide at the hands of the former regimes of Iraq. Former regimes of Iraq destroyed many Yezidi villages and arrested and abducted great numbers of them, and changed their identity. The Yezidis were attacked by the vicious Al-Qaeda after 2003. Forty Yezidi workers were executed in Mosul by them, the massacre of Giruzer and Siba Sheikhdir. After that, the ISIS carried out genocide in a systematic way in Shingal area.

The collection of evidence of the crimes of ISIS will leave no doubt that what they committed against the Yezidis is genocide and war crimes according to the international law. This means that it is a legal, moral and human duty of the international community to support ISIS.

It is appreciated that the Kurdistan Parliament has recognized the Shingal massacre as genocide. Also, it is appreciated that the ‘law to support the Yezidi liberated women and minorities’ was passed in Iraqi parliament. The UNITAD, which is the UN team to collect evidence of ISIS crimes has obtained thousands of pieces of proof for the court. There are efforts around the world to help recognize the Shingal tragedy as genocide.

These are great steps to protect the Yezidis. But the law to support the liberated Yezidi women has not been fully implemented, and the condition of the displaced Yezidis in the camps is dire.

So far, the Yezidi people live in the destructive aftermath of the genocide. Greater work of the Iraqi and Kurdistan regional governments is needed with this regard. The support of the nations and groups around the world is needed. The Yezidis are victims of an organization which is the enemy of all humanity. The Yezidis should not be forgotten by the world in this dire situation. All should be done to support them.

The situation in Shingal is still extraordinary. Thousands of families have not been able to return to Shingal area. The Shingal agreement between the Iraqi and Kurdistan regional government has not been implemented so far.

Public services are poor and legal administration does not exist in Shingal. The problem of armed forces outside Iraqi defense system in Shingal has not been solved yet. There are threats against the Yezidis and the local people. ISIS families have returned. These are all extraordinary conditions in Shingal.

It is foremost the duty of the federal government in coordination with the KRG to normalize the situation in Shingal and set up a legal and interim administration. Unlawful forces must be disbanded and local people should be hired to run their affairs.

Preserving Shingal and allocating the needed budget for this purpose can become a good reason to solve the problems of Shingal and the recovery of the area. This will support the people to return to their areas.

For this objective I ask all Iraqi and Kurdistani sides to support this proposal. I also urge local, world and international groups to implement their duties regarding the people of Shingal.

Yezidis are in a dire situation. Following the genocide, they need continued assistance.

As you have witnessed, the political and security of Iraq is deteriorating. The disputes among the political parties have reached a dangerous point. Iraq needs coordination and collective cooperation today more than ever. Iraq’s protection is the common duty of all groups and factions.

The peace and stability of all of Iraq is intertwined. Therefore I ask all Iraqi parties to come together and start a dialogue and resolve their issues.

I also ask Kurdistani factions and parties to remain united and cooperate. In this complicated and critical period, the unity and consensus is needed more than ever. If we are united, we can gain greater achievements. We can help ourselves and help our sisters and brothers in Iraq to surpass the current situation.

The political sides in Kurdistan Region must resolve their differences on the issue of elections and reach an agreement and hold the elections.

We hope that the 8th anniversary of Shingal tragedy will encourage serious steps to resolve the problems of the Shingal area and the normalization of the situation and creation of the needed public services and reconstruction.

The resilience of the Yezidis in the face of such grand tragedies is saluted. With this faith and belief, I am certain that the wounds can bee healed and we can take steps towards a better future for our people.

Thank you for your attendance.

Tributes to the innocent souls of the victims of the Shingal area. Special thanks to Dohuk province and governor for their continued support and their compassion for the Shingal displaced and other refugees, including Christians, and all others who came here. I have repeatedly said that the strength of Kurdistan lies in its peaceful coexistence. I hope that our people, whether Muslims, Yezidis, Christians, Arabs or Turkmen, we live together on this land. Our responsibility is shared and we have a shared future. Our hope is that with the help of god we will take great steps towards a better future.

Welcome again everyone and thank you for your attendance.