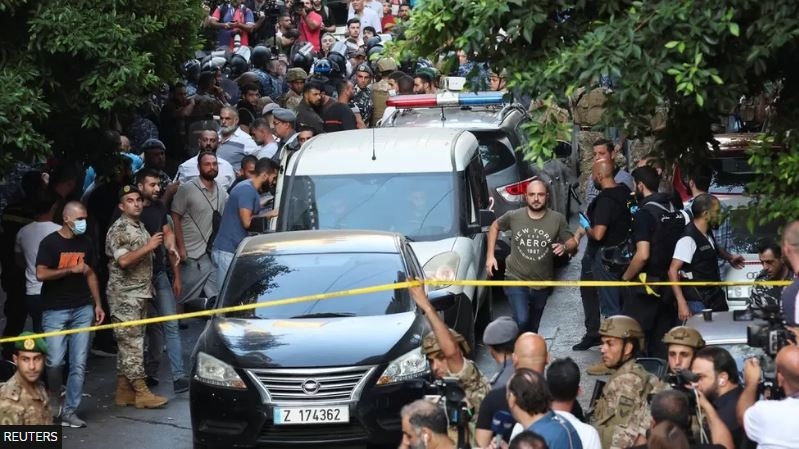 An armed man who held a bank hostage for more than six hours in Beirut because he could not withdraw savings has been hailed a hero by the public.

Banks in Lebanon have put tight rules on how much money people can access, amid a deep economic crisis.

The suspect entered the bank with a rifle, poured petrol and demanded his money for hospital bills, AFP reported.

His actions captured public support - with cheering crowds gathering outside and chanting: "You are a hero."

The stand-off eventually ended peacefully with no injuries, after negotiators struck an agreement allowing the suspect to receive $35,000 (£29,000) of his savings upfront, LBC TV channel reported.

Hamra Street, in the west of the city. Officials have not yet said whether the man will face charges.

According to LBC, the suspect's family were in dire need of their savings, with some family members in hospital.

And his wife and brother, who were outside the bank, said that "everybody should do the same" to get access to what is "rightfully theirs".

There has been widespread anger in Lebanon over the strict controls over people's bank accounts, which came into force in 2019. There are also restrictions on transfers of money abroad.

The country is in the midst of one of the world's most severe economic crises in modern times - and its impact is being felt even more as the cost of living spirals and there are shortages of wheat and medicines.

Outside the branch, protesters had chanted: "Down with the rule of the banks".

"Similar incidents keep happening," George al-Hajj, who heads Lebanon's bank employees' union, told AFP. In a separate incident in January, an angry customer took dozens of hostages at a bank in the Bekaa valley, demanding to be able to take his money out in US dollars.

"Depositors want their money, and unfortunately their anger explodes in the face of bank employees because they cannot reach the management," he added.

Lebanon's local currency has lost more than 90% of its value since the onset of the crisis - and the UN says four fifths of the population are living in poverty.